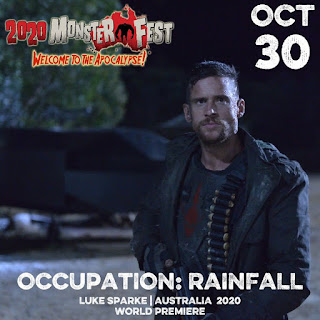 Above Photo:  Promo poster for the premiere from Occupation Official Facebook Page.

Greetings valued Dan's Movie Report and Action-Flix.com readers, spoke to the director of 'Occupation: Rainfall” Luke Sparke today! The film will be having its Global Premiere in Australia October 30th , (please adjust your browsers to desktop mode for videos!)

The event will show in four cities at the same time!
:

Director Luke Sparke had this to say: “This is a festival advance screening premiere. More news is pending." 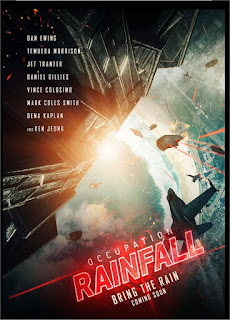 Above: Poster image for Occupation: Rainfall on IMDB!! Used for Promotional purposes only, all rights reserved.

I spoke to star Jet Tranter and scheduled our third interview as soon as I have watched the film! Jet had this to say: “I really enjoyed making this film and portraying the character of Amelia!” Since Jet is in Melbourne she will have to wait a bit to watch due to the city being in lock down, as soon as we both see the film an interview will happen!

Editor note: (Amelia has grown since the first movie as the first film she was an unwilling participant in the war, now she takes on the aliens full bore! An interesting dynamic! So the team are adapting by casting a new Amelia who can do action like Jet, who has acted in Tidelands and Lady Bloodfight!) What is cool is both actresses play the character in a different light!, I like this!!!!) I fully recommend watching the first Occupation Movie!

A very cool behind the scenes featuring the cast and crew chatting about the film:

Respect to this team really involving and hiring many local Aussie performers, support indie films, and when this film comes out in your country BUY IT!!!

Connect with Saban Films to find out more on how to watch the first 'Occupation' movie http://www.sabanfilms.com/

In case you have not heard of Actress Jet Tranter, please check out my two detailed interviews with her, one for 'Lady Bloodfight' and one for 'Tidelands'!