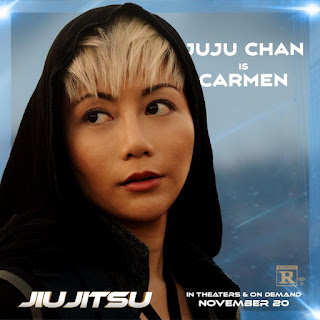 Above Image: Promotional shot of JuJu Chan in character from Jiu Jitsu. (C) 2020 Paramount All rights reserved, used for promotional purposes only.


Greetings valued Dan's Movie Report and Action-Flix.com readers. Actress JuJu Chan stops by for a brand new interview. JuJu can be seen in the brand new film from Paramount, 'Jiu Jitsu'. The film also stars Alain Moussi, Marie Avgeropoulos ,  Frank Grillo , Nicolas Cage and Tony Jaa . The movie is a nod to old school SciFi films, fun and entertaining. JuJu shares her thoughts on Jiu Jitsu, working with Tony Jaa, Nic Cage, and what she is working on in Hong Kong currently. Sit back, relax, grab some tea, time to get behind the action with JuJu!

Danny Templegod: Chat about the audition process for Jiu Jitsu? Was the role of Carmen written for you, or was it a casting?

JuJu Chan: I didn’t find out till after I arrived in Cyprus for the shoot, but the role was indeed written for me, so there was no audition process for me. I was offered the role and seeing Nicolas Cage, who I’m a huge fan of, and Tony Jaa (we’re both with the same agency and have been looking for projects to work on together) were on it, I jumped at the opportunity.

DT: Your character seemed tailor made to your personality, that is why I asked haha. I make it no secret that I freaking loved the film, a throwback to old school 80s SciFi action, with an added martial arts twist, what attracted you to the script and to your character?

JC: It just seemed like such a way-out-there fun idea! I mean, anyone who writes a serious critique of the film doesn’t get it. It was never meant to be a serious film. It’s pure high concentrate martial arts entertainment tailored for the hard core lovers of M.A. action out there! For me, I loved that the Carmen character was both a killer fighter and a bit of a girly girl when it came to her relationship with her man. She’s kinda like me that way…LOL 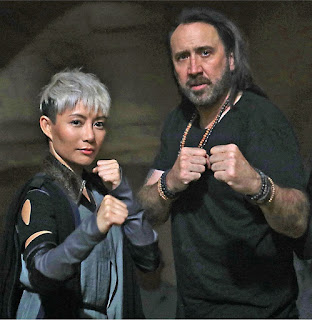 Above Image (C) 2019 Daniel Herron, All rights reserved. Image used for promotional purposes only, not monetized.

DT: Yeah I never understand people slamming a fun film. Chat about working with Nic Cage, always respected his acting prowess, were there nerves or was it relaxed working with him. Perhaps let the world know , some things you learned or tips acting wise you may have picked up from him as I know you are a student of film always learning and growing.

JC: Any nerves that I would have had working with Nic were all dispelled by him the first day we met. On day one I arrived at the stunt gym where he was rolling with the stuntmen, doing BJJ. As soon as he saw me he got straight up, walked to me with his hand out to shake, and introduced himself like he was a complete unknown actor. I mean, he’s fricking Nicolas Cage! But he turned out to be the most humble, hardworking, and talented actor I’ve ever worked with. He made it very easy for everyone to work with him. And he did most of his own action! That’s dedication for you. I learned so much from him it’s hard to list it all. But it’s not just about the craft, it’s also about how to collaborate and get more from people. He’s every bit the star he deserves to be.

DT: What a cool story, I hope you can work with him again! I am thrilled you got to work with Tony Jaa as well, a real talent and honorable man, chat about his fighting skill and humble attitude. I always mentioned you to him in our communications. I am sure you both had the opportunity to train together, chat about working and training with Tony. 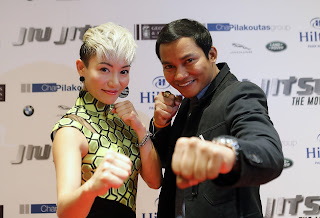 Above Image (C) 2019 Daniel Herron All rights reserved, used for promotional purposes only, not monetized.

JC: Tony’s amazing skills are known by anyone who’s seen him in action. He just has a way to make his moves look so powerful, yet he’s always in control and you feel safe working with him. And he is so Zen to be around… any pressure during the shoot seems to be repelled away by him. Definitely looking for more projects to work with him again!

DT: The location of Jiu Jitsu was lush and amazing, chat about working in Greece and the variety of locations you used.

JC: So we filmed in Cyprus. I didn’t know this until I arrived there, but it’s known as the Island of Love because the Goddess Aphrodite was said to be born there. It’s just such an amazingly beautiful country, and for such a small nation there’s so much to see and do there. You can go skiing in its mountains in the morning, then hit the beach in the afternoon! We shot in its countryside, a cave and on sets. As you know the film was set in Myanmar, and I think the set designers did a pretty good job with making everything look like it was there.

Above Photo: JuJu Chan as Carmen gets to using her favorite weapon in Jiu Jitsu (C) 2020 Paramount All rights reserved, image used for promotional purposes only not monetized.

DT: Very interesting about Cyprus, I thought you filmed in both Greece and Cyprus locations. Chat about the long action take you posted about and how important that is to continuity rather than quick, blink and you miss it edits. Did you have some fights that were edited for time, curious what else was filmed? After the opening part at the military base took like several minutes, to set the story, the rest of the film moved very quickly, some parts seemed time edited.

JC: When acting take by take it’s very difficult to gauge what the film will finally look like. That’s really the director’s job. Honestly, when I finally got to watch the film it was quite different to what I remembered of the script. But for my part, it was extremely important to me to get the action right. Luckily I was working with a great stunt team, with fantastic fight choreography from Alain, Ryan, Max and the Thai stunt team. And it was great that they all wanted to bring out the best in each of us, so fighters like Tony and Frank got to show off their best moves, and I got to do what I most wanted to do. Of course that meant I got to show off my double nunchakus, which is my favorite weapon.

Long fight takes are what shows off the physical skill of an actor. Look at the great fight sets of Lau Kar Leung, a master of Hung Kuen who directed some of the most iconic Hong Kong martial art films. He had a great staff fight against Sammo Hung which to me is one of the greatest onscreen fights. The choreography was so intricate! I want to do onscreen fights like that. So with 'Jiu Jitsu' I wanted long takes whenever I could.

Above Photo: JuJu Chan as Carmen, gets to kicking a thug in 'Jiu Jitsu' (C) 2020 Paramount All rights reserved, used for promotional purposes only, not monetized.

DT: I refuse to spoil the plot of course for those who have not seen 'Jiu Jitsu', but it does follow parts of the original 'Predator' film, yet feels more physical, what are your thoughts on the story in general not just your parts?

DT: Ok JuJu, homework, time to watch the original 'Predator', haha! I will say that 'Jiu Jitsu' is getting some major ads and even a limited theatrical run here in the U.S., I know Antony told me that the initial premiere was supposed to be in Las Vegas, do you know if there any plans in 2021 to do a second theatrical push, or even a cast and crew premiere?

JC: I haven’t heard anything like that yet. Really, this pandemic has put a real spanner in so many plans that people aren’t willing to organize any events yet. Let’s see how things pan out later in 2021. 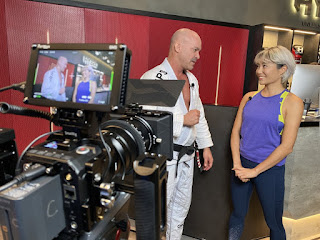 DT: I know you are working on two new projects. Perhaps in a sentence or two describe the reality show you and Antony are working on in Hong Kong, and the Database for Champion Martial Artists.

JC: Right now I’m working on two projects: A reality TV show that introduces a different style of martial arts through the eyes of a new student, and a database for martial artist called WarriorDB.com. It’s still being built but it’s live. If anyone is interested in adding data to it have a go! 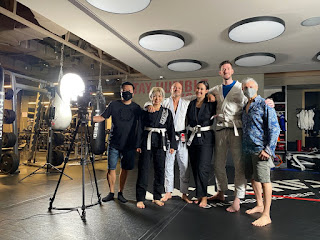 Thank you JuJu, for another entertaining and informative chat! Watch for a JuJu Chan autographed photo contest early in 2021!!