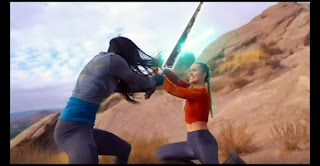 Above image: Lauren Mary Kim and Amy Johnston battle it out in 'This is the Way'


Greetings valued Dan's Movie Report and Action-Flix.com readers. This is the way! I must say The Mandalorian has profoundly altered the course of Star Wars. Baby Yoda, Gorgu has exploded into the landscape much in the way the original film did over 40 years ago. Action stars Amy Johnston and Lauren Mary Kim have once again out did themselves. A three and a half minute, well 3:41 blast of insanity 'This is the Way' has just been unleashed. Lauren has doubled on several episodes of the Mandalorian and most recently has worked as the double for Ming Na-Wen and Diana Inosanto! Finally, with the Emmy Awards having a category for stunt performers, the hard working stunt people will be cast in the limelight, out of the shadows!

'This is the Way' is a short film that showcases the tremendous talents of Amy and Lauren, and camera work, VFX, and editing of Cameron Early, also their humor! They are after Baby Yoda, and of course a fight will ensue! They are transported to a barren land for a fight! Credit for all involved in this kick ass short film! Watch Amy summon the power of the force! Timely and entertaining, This is the way! Who wins in a fight between Amy and Lauren? We all do! The ladies are fans of action, fans of comics, and extremely creative all while partaking in action!

Special thanks to America Young. Thanks to Galaxy of Comics for letting us film at your awesome store! Go check it out peeps! https://galaxyofcomics.com/ Thanks to Noah Fleder for giving us great sabers! Check his work out guys! https://www.youtube.com/user/forcesto...

Of course check out the Dan's Movie Report interview with Lauren where she details her short film Kali Dairies Series: http://dansmoviereport.blogspot.com/2019/01/lauren-mary-kim-interview-c-2019-danny.html

Make sure to subscribe to Disney+ for all things Star Wars, support action and stunt performers!