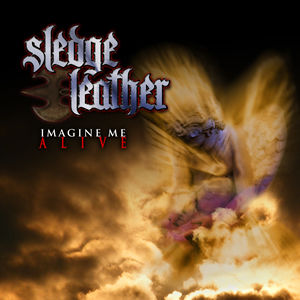 
As promised, Dan's Movie Report becomes Dan's Music Report in anticipation of the new film Rock Of Ages. As a music journalist in the 80s, and early 90s I was lucky to be ale to meet and interview many of my favorite underground and national acts. What better way to start off my new feature than blasting out a review of a new band that includes musicians that have a long history in making heavy music. Time to go inside Sledge Leather!

Inspired by the death of Ronnie Dio, Leather Leone decides that the time is right to delve into the music world agsain after a nearly two decade absence. Meeting up with drummer Sande Sledge again 1/2 of the old Malibu Barbie line-up is together.

For "Imagine Me Alive" the band stick to their roots and put forth a sonic blast of 80s inspired power, updated to 2012 in the lyrical content. The music is undulating, driving, full of energy and vivaciousness, characterized by Leather's unmistakable voice, and Sandy's ever steady pulsing beat. The title track Imagine Me Alive is a standout, mixing almost anthem qualities with driving rhythms. The tunes flow seamlessly and a provocotive mixture of pre-recorded movie lines provide a few of the transitions.

I like the disc, the short running time leaves me wanting more and is kind of disappointing, but after listening to the disc over and over again, the music all merges together. I enjoy "Imagine Me Alive" and recommend a purchase. I give "Imagine Me Alive" a 7 out of 10, an inspiring re-birth, and new project of Sledge leather!

The music and various other items can be obtained directly from their website @  http://sledgeleather.com/