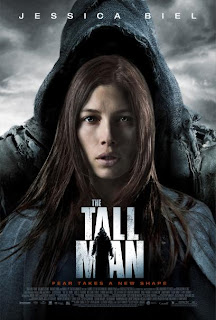 Above Pic: Poster of The Tall Man

With the big budget release of Total Recall on everyone's mind, Dan's Movie Report takes a hot Jessica Biel independent turn with the thriller The Tall Man. Jessica stretches her acting chops as nurse Julia Denning in a downtrodden town, where children keep disappearing at an alarming rate, due to a mysterious "Tall Man" lurking in the shadows.

The plot on The Tall Man unravels rather methodically for the first 20 minutes of the film.  All of that changes in the middle of the night, when a window shattering leads to a startling change of events, and David is abducted from Juila's Care.

The final hour of this film is crazy, violent, seething with life and energy. No way am I gonna spoil this masterpiece. Julia Denning does not sit idly by an just let things happen, she exudes energy and tries to get to the bottom of the mystery. Yeah, surprising things happen, and it would be a crime to spoil it!

Jessica Biel, all is not what it seems in The Tall Man! (C) Cold Rock Productions 2012

The Tall Man is part horror, mystery, and thriller wrapped into one package, and in Jessica Biel the producers thankfully found a perfect person to play the lead character. Jessica is at times vulnerable like a child, other times her expression and attitude pierce daggers.

Technically The Tall Man is shot in a dark foreboding style often the scenic background is blocked out and the character's faces are shown in up close shots. Time is taken in the set design with the town, as dilapidated buildings and cars are strewn throughout the landscape.

The acting in The Tall Man is solid. Veteran character actor William B. Davis is stoic as the Police Detective, Rough girl actress Samantha Ferris exudes force in her portrayal of Tracy. Eve Harlow as Christine, plays a sometimes mousy character with an alternate side. The quality of acting serves to enhance the film.

Overall this is a MUST purchase. One of those films that deserve a place on your mantle. I rate The Tall Man an 8.5 out of 10, and sulty Jessica an 11 out of 10. One day she will win an academy award, if Hollywood would wake the hell up and look past her beauty and recognize her acting chops!

Pre-order The Tall Man from the Amazon link below, it ships September 25th.