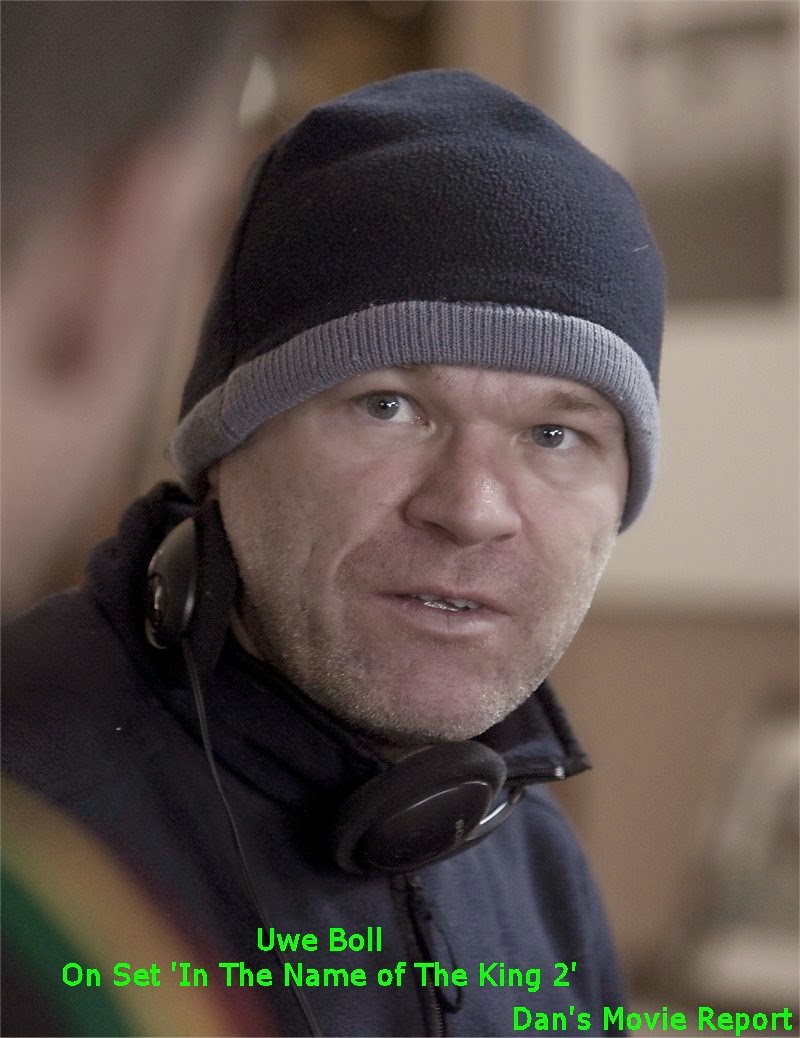 Above Photo: Uwe on the set of 'In The Name of the King 2'

Greetings my esteemed readers, I present an interview with the talented independent film maker Uwe Boll. Uwe is a true trailblazer in the movie world. Perhaps best known for the Bloodrayne series, Uwe has branched out, and he is taking his recently released 'Rampage: Capital Punishment' on a theater tour in Europe, answering questions from the audience. Uwe has many diverse and unique ideas about film in addition to the direction the world is heading. Time to sit back, relax, and take a day trip to Uweville, a town on the end of a dark and winding road! 3-2-1- Go!

Going back a bit to the first Bloodrayne, The first film had an cool cast including, and a pretty large budget, did you get pressure from the distributors to alter the film for content, and or change parts of the story?

No …. but as you know only the GORE version has all the gore.

Chatting about the next two films, for the second and third Bloodrayne films, Natassia Malthe played the title role, were other actresses also auditioning or did you have her in mind all along?

I asked her first and she said yes ….so no need for castings.

Natassia Malthe is really cool to watch, do you think that she brought out the sexier side of the Rayne character? Chat also about working with Kim Chiang as Natassia's, stunt double, she is an amazing martial artist, Seems like Rayne got to do some real ass kicking in Bloodrayne 3!

Yes …She is a ballerina …and sexy … Loken was more like a tank….. and sexy also…

What are some of the aspects looking back on the Bloodrayne series would you change if given the chance to?

No Michael Madsen in BR 1. 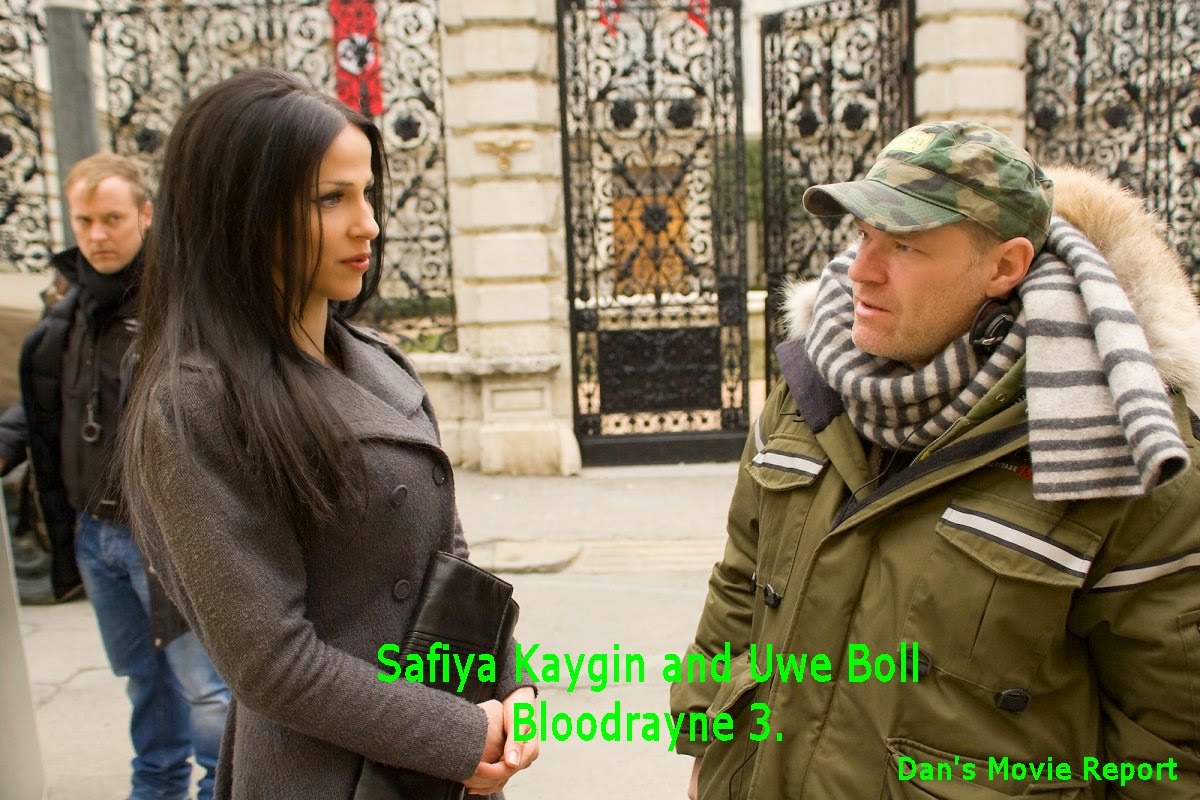 Above Photo: Uwe chats with Safiya Kaygin on the set of Bloodrayne 3, for more info on Safiya check out http://www.safiya-music.com/ and my post @ http://dansmoviereport.blogspot.com/2013/11/safiya-releases-my-revelation-enhanced.html

Ok, guess I will just roll on, haha. In all the Bloodrayne films there is a lot of nudity, which is actually part of the story, was there pressure to edit some of it out from the distributors?

Some countries censored it …I like the sex aspect ,…because Vampire movies need to be not only bloody ….

Speaking of nudity, everyone knows that sex sells, and in the US, sex on screen is so taboo, you can blow someone up, but god forbid a nipple is shown, Uwe, do you feel that US films in general are to watered down, kind of cheating to get a PG-13 rating, thus a wider audience?

Of course ,…all that absurd PG 13 Horror movies …I cannot watch them ….. I basically want only R Rated movies if I watch movies ….

Shifting the discussion, chat about Postal, how did that concept and idea come about? Direct from the news? Movies imitating real life?

I think the news media in general feeds you what they want you to hear, do you think that there is a trend in movies to expose the lies we are fed, to show more realism?

Not really ….I think what Brendan Fletcher in RAMPAGE 2 says ….that its OPIUM FOR THE MASSES ….. the movies who are out there are not really questioning the status quo.

Speaking of realism, Rampage, and Rampage: Capital Punishment, are amazing, are they fully intended as a society commentary, to show the side of the news we never see?

Absolutely ….especially now RAMPAGE 2 ….put the finger deep into our wounds the message hurts and it should hurt as long we don't change.

The fact that Rampage: Capital Punishment is actually expressing what many feel about the news media, and what we are fed,and the lies. how do you think we as a society can change it? I think the violence in Rampage: Capital Punishment is a metaphor for anti establishment, What messages and ideas do you discuss when bringing the film to theaters worldwide and having interactive audience discussion?

In Germany now we have hard discussions about it …..In USA no cinema is showing it ….I hope for the DVD and TV sales ….. RAMPAGE 2 will be hopefully on Itunes, Netflix, Showtime etc…. People see the absurdity we are living in when you see RAMPAGE 2.

Look what is happening in Ferguson ….here you see how many people are feeling miserable in USA ….how much injustice ….. 10% of the black people in USA are in jail….. its crazy. Why are prisons private ….? So they make money if people getting jail terms….So why are 25% of the worldwide prisoners are in jail in the USA …? Because the justice system is corrupt ….
In USA …we need change ,…not talk.

Movies imitating news is one thing, but in Rampage, you actually create news, the viewer becomes engaged, angry, and frightened. One scene in particular without spoiling the film involves a yoga woman angry at Bill and she comes at him. I actually thought Bill was going to tell her to punch someone else, instead he asks another person to punch her. What was the intention of that scene, to evoke pity, anger, fear or a combination?

These are 2 separate scenes …the one with the yoga girl…showing that YOGA is not doing anything good to the world ….Yoga is a way to spend time if you have to much money and time …. The second scenes is with the girl who wants to go after Bill…because he killed her sister…. And Bill makes the guy hitting her …..

Oh, thanks for clarifying. Speaking of theater discussions, although I do not speak German, they seem to be lively, what prompted you to travel around and discuss the film with the crowds?

In Germany at least …I was able to organize a tour on my own ….. In USA you need to PAY the theaters if you want your movie played. 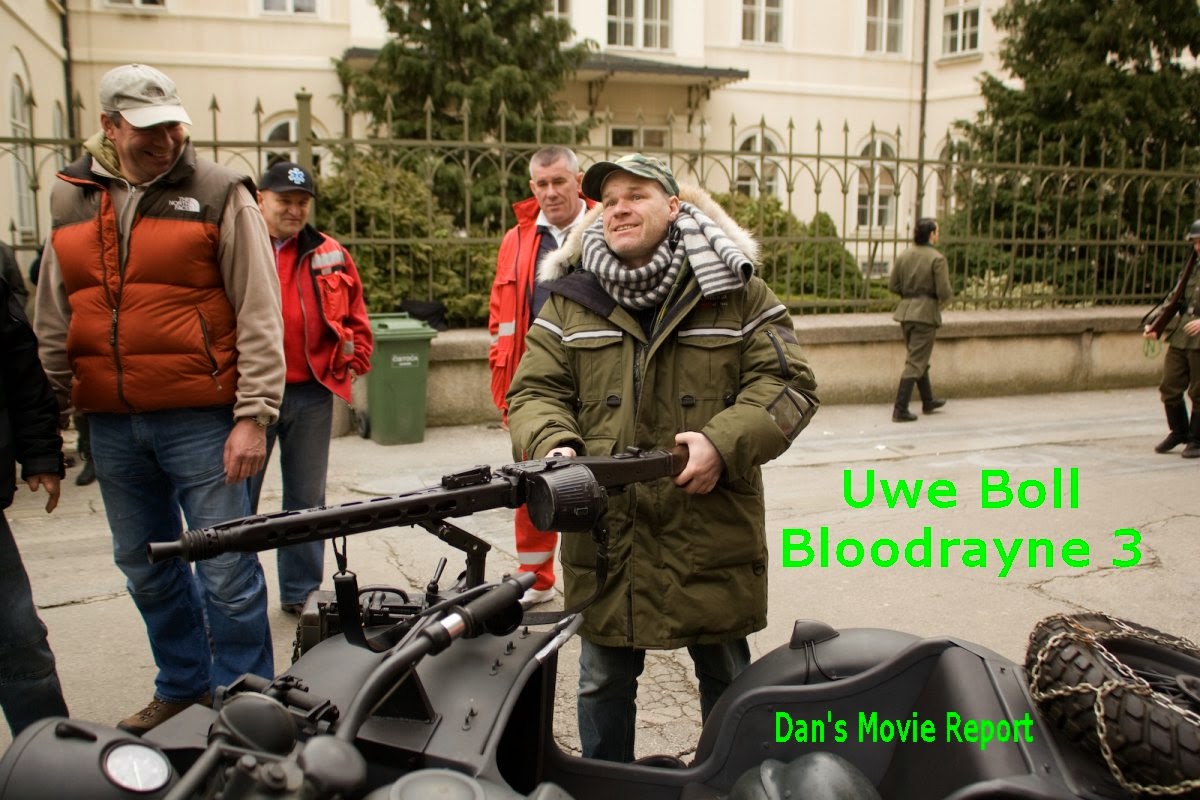 Above Photo: Uwe holding a big gun on the set of 'Bloodrayne 3'

Uwe you have also supported indie film makers and people that blaze their own trail, Chat about working with Tara Cardinal and helping her as Executive Producer on Legend of The Red Reaper. Do you plan more projects with her?

If Tara makes another movie ……I'm always willing to sell it worldwide for her.

How about other collaborations, do you like partnering with others on film projects, or are you more focused now on your own material?

My company EVENT FILM …www.eventfilm.us sells a lot of movies …where we help with money and distribution.

After the promotions for Rampage are over, what are some of the projects in the pipeline for your production company, 12 Hours, what is that film going to be about?

Finally add some Uwe words of wisdom for up coming film makers, give them a dose of stark reality.

Learn …but believe in you. Everybody cooks only with water ….and you will get better by doing it.

Thanks Uwe, for those amazing pearls of wisdom, watch for more exclusives from Uwe in the coming months on your home for exclusives Dan's Movie Report!

My review of Rampage: Capital Punishment is @ http://www.dansmoviereport.blogspot.com/2014/08/rampage-capital-punishment-movie-review.html
Posted by Dan's Movie Report-Danny Templegod at 10:09:00 AM