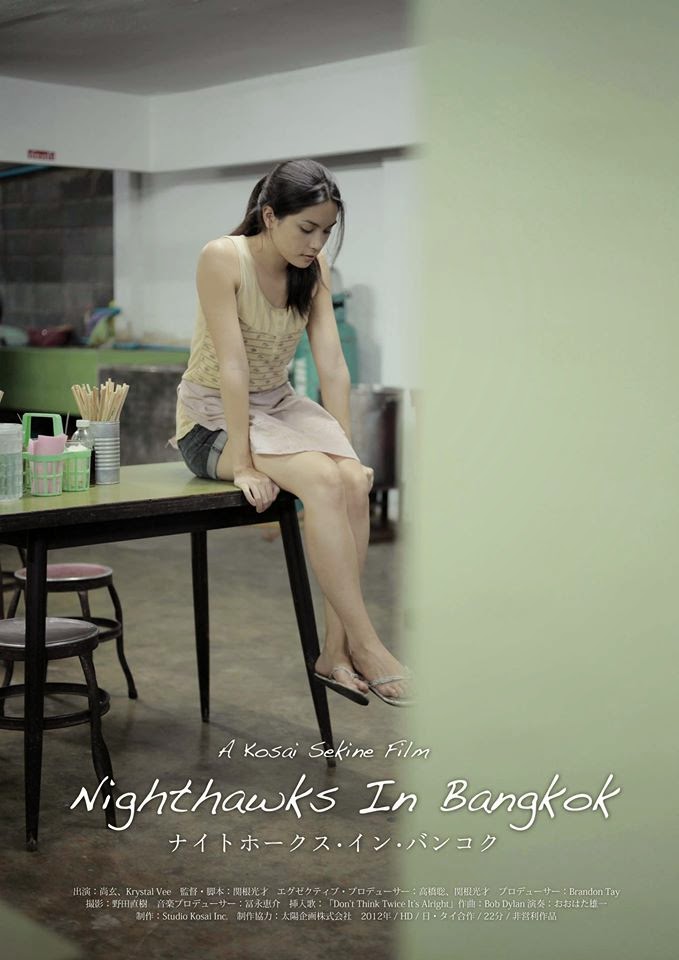 Above Picture: Poster for Nighthawks In Bangkok (C) 2013 Kosai Sekine

Hard to believe that it was 3 short years ago, that I had the fortune of interviewing Krystal Vee for my website. Krystal has made the big move from Thailand to the U.S. pursue her acting dreams, all the while working on her craft and remaining grounded.

Nighthawks in Bangkok is a story about a restaurant waitress Proy who works with her family who feels empathy for a lonely man, a drifter, played by Shogen  who hangs out at the restaurant only ordering one beer. Shogen has dozens of lines of dialogue in the film and pulls them off expertly. Watch for him, currently he is in the amazing Streetfighter: Assassin's Fist.

The 22 minute film, expertly written and directed by Kosai Sekine essentially is a chance meeting, of a man who wants to tell the story of his life, and a person who is willing to listen, and not judge. The story undulates with emotion, and displays many trials and tribulations of real life.

He tells the complete story of his past relationship, why it changed, how it ended. All the while under a listening ear, not offering any additional commentary. More often than not, films rely on a diatribe to initiate some sort of conflict, Nighthawks In Bangkok, displays the conflict inside the mind of a troubled young man, and rather offer ways to help, at times, what is needed is just a good listener. Incidentally, he speaks the majority of dialogue in a language she does not understand, do not worry there are English subtitles.

Nighthawks In Bangkok is not just about the words, it is also about the emotions Both leads are excellent. There is an air of pensive sadness, to the drifter character, but towards the end of his description it appears to become evident, that he has affected Proy, although she does not speak, her body language is strong with empathy, but her work calls her back.

Short films are a powerful tool in an actor's arsenal. Although she is from Thailand Krystal Vee speaks very clear, proper, and erudite English, yet in Nighthawks in Bangkok, she speaks English in a Thai dialogue that is exactly like a typical worker in a Thai restaurant, complete with staccato  vocal inflections, and the chopped English. Krystal is constantly honing her craft, and learning all she can about various aspects of acting and Nighthawks In Bangkok is an important step in that evolution. Hopefully she can continue to obtain more dramatic roles.

Perhaps the most interesting part of Nighthawks in Bangkok is the ending. While totally ambiguous, I can see Nighthawks In Bangkok as a short film, actually being the beginning to a feature length film. What happens after their chance meeting, how would the drifter change his life, how would Proy change her life, would the encounter have an impact on other people in there life? Many questions left unanswered, yet many answers, without questions. Nighthawks in Bangkok displays a perpetual conundrum in the circle of life, death, and relationships.

I strongly recommend Nighthawks In Bangkok, and rate the short film a 9 out of 10. No explosion, no fighting, no car chases, just a person telling a story, and what a tale he weaves!