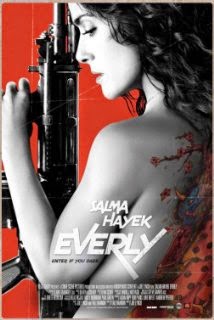 Ever since the sultry, Mexican Minx Salma Hayek was in the film 'Dusk To Dawn' as the salacious snake wielding stripper Satanico Pandemonium almost 20 years ago, every red blooded male has wanted her to do a full fledged action film. Trust me, whatever any of my valued readers are doing this moment, with the possible exception of giving birth or saving a life, nothing is more important than dropping what you are doing and watch 'Everly'. Be warned, this is the most violent twisted, sadistic, maniacal, unabashed, audacious, and crazy action film you will EVER see.

The film opens with Everly (Salma Hayek) in the bathroom, searching for her gun, which is in the water tank of the toilet. She is being hunted by her mob boss ex, and is told that she must die tonight. In fact the whole film is a series of events designed to torture and eventually kill her. Obviously she stole some money from the mob, and a series of ever more powerful bosses and killers are sent after her.

Salma, is in raw form, sexy, bloody, and aggressive. Everly oozes sexual energy without the sex acts. One by one, Everly is forced to combat a series of very bad people, starting with, whom else, maniacal prostitutes, hell bent on violence, pain, and very high heels! Serious, the first set of people sent to kill Everly are hired hooker assassins, complete with false eyelashes, hair, and dangerous weapons, including one crazy check with Sais! Then the movie really starts to get crazy, after the hooker army are dispatched, watch for a sadist, a masochist, and the neighbor from hell haha! etc...!

The torrid pace slows down a bit when Everly's daughter is introduced to the fray. The threats continue with her mother and daughter added in the mix. The action ramps up as does the body count.

Hayek really surprises here, even as Satanico Pandemonium, she never elevated more then a sex object, someone to get the men titillated. In 'Evelry' Hayek is an wild tiger, a hell cat, seething with boundless energy. I figured after Salma got married to a billionaire and had a child, her desire to have a celluloid impact would diminish, happy to report, that is definitely not the case.

Salma seems hungry, and ready to return to the acting field. 'Everly' represents a new start, and a career defining moment for her. I am sure she will return to do "regular" films, comedies, dramas etc... 'Everly' will stand alone, as her coming out party of action and rage, and sets a new standard for the younger action actresses to follow.

Shooting an entire film in one location can be quite tricky and have less than desired results. Director Joe Lynch makes sure that the apartment where Everly is trapped in has many nooks and crannies, and is shot from a wide variety of angles and perspectives. 'Everly' makes the viewer feel claustrophobic, but never trapped, as there always is an escape route, even if only being shown on cameras mounted throughout the apartment building. Everly wants to escape, she feels she has to, but cannot.

The use of a variety of lighting and sepia tones in 'Everly' sets the mood. This is a place where many will die tonight, and we the viewers sit and watch like voyeurs to the mayhem. Everly is a wicked and violent lady, however she has a caring heart for her family, to witness Salma's emotional roller coaster is obviously Oscar worthy, but hell, no member of the academy would have the balls to watch the film, much less give her a best actress nod.

The 92 minute film feels drawn out, a minor gripe, if that can be believed, many "false endings", keep watching, though, and your senses will be rewarded. 'Everly' is a force of nature film, a whirlwind of wildness, that makes 'Kill Bill' and 'Sin City' seem like romantic comedies. Get ready to take a walk on the wild side with Salma, and whoa that is one side I would steer clear of if I was a bad guy!

'Everly' rates a must buy on the brutal scale, a solid 8.5 out of 10. Word of warning, this is such a violent sadistic film, if you have children under 18, I suggest that best to leave them with a babysitter for the evening.
Posted by Dan's Movie Report-Danny Templegod at 4:08:00 PM