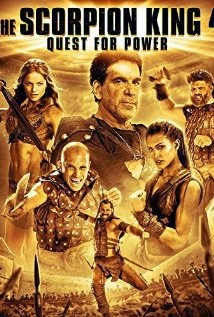 Hard to believe it was over 12 years ago when the first Scorpion King hit the movie theaters. With a big budget The Rock and Kelly Hu, the movie was pretty cool, but definitely did not live up to the box office expectations that the mummy franchises have set. The three spawned sequels have all been DTV movies.

Fast forward to 2015, Scorpion King, now with it's third DTV sequel has established itself to the home movie market as a raucous fun filled adventure, part Indiana Jones and part UFC haha. While the third film focused more on interplay between characters and an eventual budding romance between Silda (Krystal Vee) and Mathayus (Victor Webster) The 4th installment is a slobber-knocker fight fest complete with cameos from Lou Ferrigno, Don (The Dragon) Wilson and WWE Superstar Eve Torres, Royce Grace, Esme' Bianco, and Antonio Silva. Yes, the preceding names are an example of why this film is a fight fest more than a quest fest.

The movie is full of action in the first 30 minutes and hardly slows down enough to give the audience  a chance to breathe, so if action is your cup of blood than enjoy. We start learning of the plot in earnest when Mathayus gets thrown into the dungeon after being caught, and meets up with the slinky yet feisty blonde lady named Valina played by Ellen Hollman  Ellen Hollman's performance was aggressive when need be and feminine when need be. Ellen is beautiful and is obviously fully aware of her character's movements and actions. Check out Ellen on her official site @  http://ellen-hollman.com/
Facebook @ https://www.facebook.com/EllenHollmanOfficial
(thanks for the correction-Ellen)

Once they are freed from the dungeon their quest begins to find the keyhole that the ancient key opens. There are chase scenes, hiding, fighting and running across the terrain of the mythical countryside as Valina looks to her father for the answers to the Key.

Scorpion King 4 has some flaws, although it is full of action, unlike the third installment, is just not witty and humorous enough to fulfill the quota. Scorpion King 3 had massive battle scenes with Elephants, chases etc, and felt like a much "bigger" film then the actual budget. More questionable CGI in Scorpion King 4 takes away from the feel of the film as well. An example is a series of swinging pendulum blades in a room they had to pass. Their were too many blades, and the movement was not fluid, perhaps two actual fulcrum blades, painted and looking like real ones would have had more impact.

I loved the fighting, however, and Scorpion King 4 delivers one of the most epic female fights in any film between Valina and Chancara (Eve Torres) The massive fight seems to go on for an eternity with ebbs and flows during there undulating battle. Eve Torres is aggressive and really enjoyable to watch, I hope she can get some lead antagonist roles in the future. She looks really mean and angry, and is threatening enough to be believable as a rough and tumble bad girl.

Finally, after a second viewing, which I did enjoy a bit more than the first, I evaluate the film at a 6.5 out of 10. A definite watch, and purchase if action is your desire. The film is available worldwide today and can be purchased through the link below on Amazon.