Action Icon Awards 2015, and my vote goes to Tamiko Brownlee, Stuntwoman of the Year!

Greetings Dan's Movie Report readers! On Sunday October 18th a huge event called the Action Icon Awards will take place. The event is amazing and unites stunt performers all over the world! Here is the full finalist list @ http://actioniconawards.com/wp-content/uploads/2012/03/SWA_Finalists-Flyer_2015.pdf

And Tamiko Brownlee, is up for Action Icon stuntwoman of the year! 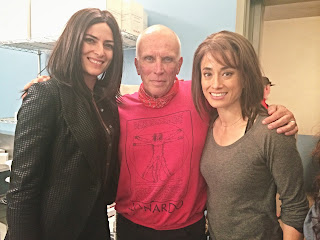 One of my favorite episodes she did is a massive stunt fight scene doubling the actress Grace Park in the Peter Weller directed episode of Hawaii 5-0! Above is her pictured right with actress and action goddess Monique Ganderton and the amazing Peter Weller! http://www.imdb.com/title/tt4302496/?ref_=nm_flmg_stn_25

Among the distinguished nominees is action icon and all around hard worker Tamiko Brownlee. Of all of the performers she has the most amount of credits and has in my humble opnion worked the hardest last year to improve herself and those around her! Tamiko is humble respectful and has a variety of talents in the film world. Her star is rising and it is time she gets this amazing award! Here is a short haha well long list of just her 2015 work!


That is JUST 2015! Tamiko has been not only busy, she has been learning new skills and also helping others better themselves along the way!  Here is her 2,500 word interview from January of 2015 on Dan's Movie Report!
http://dansmoviereport.blogspot.com/2015/01/exclsuive-tamiko-brownlee-interview-c.html