Greetings valued readers of Dan's Movie Report. What you have come to expect from this site is exclusive content, and interviews with the movers and shakers in the film world. David William No is more than just an amazing action professional, he has trained as a physiotherapist and works hard behind the camera as well. His most recent efforts are excellent work on Altered Carbon, and detailed work in front of and behind the camera on Blindsided: The Game (Movie) He also worked on The Jesse V. Johnson film starring Scott Adkins, The Debt Collector.

David discusses Blindsided: The Game (Movie) in depth and as a tease, prior to the interview, he discusses the high fall stunt in the film!!!

“The other big gag was the high-fall. Because the panoramic view of the city from the roof was so beautiful, we wanted to shoot that location.  We had to problem-solve how the fight was to end, and decided that Ace should take one back-step too many!   We set up the idea of a grand battle between Walter and Ace - but cut it short with this big gag.  It had been a while since I had jumped from any decent height, so on top of producing, and preparing my role as a card-shark, I found time to go and practice some falls. High falls are serious business. When they go right, they are effortless, but when they go wrong, someone dies.  For my stunt, I had to go off backwards - another level of difficulty” 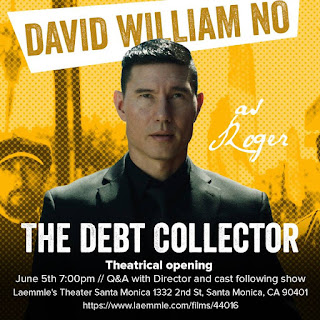 David is attending the premiere of The Debt Collector, Tuesday June 5th@ watch for more exclusive photos from the premiere from Dan's Movie Report! Follow the links at the end of the review to purchase the remaining tickets! https://dansmoviereport.blogspot.com/2018/05/the-debt-collector-2018-movie-review.html