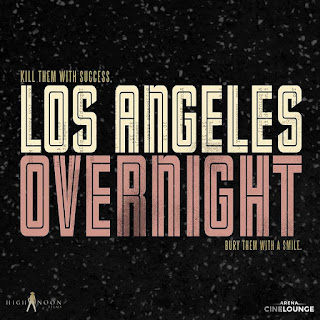 Greetings valued Dan's Movie Report Readers. Special thanks go to Los Angeles Overnight Star Ashley Park, for letting me know about the film and the fact that it is available free to watch for Amazon Prime Members!

Every so often a indie flick comes along with some really amazing dialogue, that makes the viewer pay attention to detail and allows for introspection inside the minds of the intersecting characters. Getting right into it, Writer/Producer Guy J. Jackson really has created a noir crime thriller. Hard to compare it to any other film, maybe in theory to Pulp Fiction, but unlike Pulp Fiction the main focus is not on the main criminals and the fact that Priscilla (Arielle Brachfeld) is more forced into the stealing due to her inability to make ends meet as an actress.

The cool thing here is the actors all had a chance to shine and share in the meaty dialogue. Legendary actress Sally Kirkland portrays Miss Chantilly a woman dead set on opening a high class club in NYC, and recruiting young waitress/actresses to staff it. Her scenes are lavishly embellished with a side of sarcasm and crazy. Ms Kirkland always lights up the screen. I do wish she had more screen time, but the film had a tight running time of 93 minutes, obviously things were cut out, but I do feel the film could have used 10 more minutes of run time to make the characters more developed.

Ashley Park portrays Abelie, with a quiet yet dangerous intensity. Her character is seemingly innocent at first until we find out her true intentions, quite ruthless. I do hope to see Ashley in more roles like this where she has a chance to get in some intellectual dialogue, with colorful character development

Being that this is the first feature film from director Michael Chrisoulakis, I was rather astonished he pulled of such a great debut film as it is a tough road often for a director to make the jump from short films to features. He did a great job with the actors, and handled the copious dialogue, by allowing his actors to show their particular strengths.

All of the behind camera accoutrements including lighting and sound are clear and easy to see the and hear the dialogue. Again showing the importance of good A.D.R. (Ed note: Additional Dialogue Recording) people. With many of the scenes shot outside, it would be very easy to overlook the variety in volume, and thus even in bigger budget films some of the outside dialogue can be harder to hear.

Plot wise the story is entertaining, actually has repeat watch factor, I do hope Amazon makes the film eventually available on Blu-Ray with extra footage etc..., and commentary track. It would be very interesting to hear Guy and Michael's though processes on each character and actor portraying them.

Overall Los Angeles Overnight is a very good film, surprisingly intellectual, and full of witty, sometimes truculent, sordid dialogue. Although the dialogue from actors can be a bit loquacious at times, things move fast, and it is on to the next person dropping his or her own ruminations in a vocal setting! Los Angeles Overnight rates a very strong 8 out of 10, a must own!

Check out the Official Facebook Page of the film @  https://www.facebook.com/LosAngelesOvernight/

Watch for new interview with star Ashley Park in the coming weeks!!! Until then please check out her older interview exclusively on Dan's Movie Report @ http://dansmoviereport.blogspot.com/2015/11/ashley-park-interview-c-2015-dans-movie.html
Posted by Dan's Movie Report-Danny Templegod at 9:28:00 PM