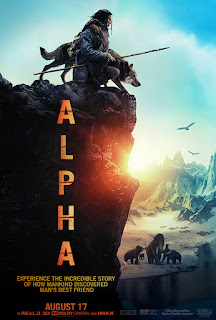 Above: Poster of Alpha from IMDB

Greetings valued Dan's Movie Report readers. In keeping with my promise of course to support actors, directors, and action professionals who have taken time out of their hectic schedule to conduct an interview with me, just had to see the newest film starring Natassia Malthe, Alpha. Actually Natassia told me about this film back when it was called 'Solutrean' which actually is a tool making style during the time of the film, which takes place appx 20,000 years ago. http://dansmoviereport.blogspot.com/2016/06/actress-natassa-malthe-in-solutrean-as.html

Interestingly enough, Natassia and I have conducted 3 interviews as well, I find her enlightening and honest every single time, and it was exhilarating to see her on the big screen again. Please check out our older interviews-

As for 'Alpha', it is a very moving visceral feast for the eyes. Rugged landscapes, dangerous slopes, and hunting with weapons constructed out of stone and wood, permeate the film. Essentially we have a singular story on how man first domesticated the wolf and began to live in harmony for the good of the hunt and the pack. Alpha is so much more than that. Layers upon layers of hierarchy with the human tribe mirroring the wolf tribe. Tau, played deftly by Johannes Haukur Johannesson, portrays the tribes leader and father to Keda. Tau teaches the tribe youth how to properly make the stone spear heads if they pass then they are included in the hunt. The process is unforgiving, and those who do not pass, are not treated with respect.

We witness the hunt, Keda, Kodi Smit-McPhee is virtually in every scene and in the initial hunt, without spoiling it let us just say things do not go as planned. In fact they go horribly wrong, essentially this is the main focal point of the movie, his long, arduous, treacherous journey. How he has to learn to make fire, find shelter, and ultimately learn that survival alone is not as easy as survival in a pack. Even if that pack is just a lone wolf.

The action tide ebbs and flows in 'Alpha' ranging from calm, to downright scary in a cave. Although the dialogue, all not in English is sparse, the emotions from all of the characters are palpable. The pain of the father losing his boy on the hunt, the grief, to the tribe members trying to comfort him. Natassia Malthe plays Rho, the boy's mother. Natassia showed her range with her somber face, and caring emotion first when she learned of her son's apparent death.

'Alpha' is a film which requires work from the audience. First of all, if one is not used to reading subtitles, then perhaps, watch a film with subtitles prior, I would say to train your eyes. Secondly, because there is so little dialogue, the audience is forced to pay attention to the character movements, facial and body expressions, and landscape location. Essentially director Albert Hughes tells the story through eyes of the characters in it rather than explaining it to his viewers.

Again, for the well educated film attendee, 'Alpha' is a really interesting ride, and quite possibly the way we did involve ourselves with wolves as in reality a pack of wolves and a pack of humans would almost invariably be in conflict, but with two wounded souls, the only option is to band together for survival. Again, the wolf is let known his place in the hierarchy order. Always eating after Keda. That said, they protect each other and since the wolves already hunt in packs, with the beta female and males often driving the prey to the alpha, it makes perfect sense that the two of them would team up to survive.

Watch for an appearance by Leonor Varela as the tribe's Shaman. The thing is due to the fact this film takes place long before the birth of modern religion or organization, many times a healer relied on medicine derived from various plants and animals and of course praying to the stars and heavens. Leonor is a great actress, was interesting to see her in this role

I opted for the 2D version at a regular theater as the museum near me decided not to show it in IMAX format. I do like to view films in 2D first, especially ones with subtitles. Even in 2D the print was pretty crisp, with vibrant sound and color. Obviously much of the movie was actually filmed outside, and it allowed for more massive scope and creative use of the camera. The running time at 97 minutes felt about right, that said, would have been interesting to have 5-10 minutes more of the tribe prior to the hunt. Alpha is definitely a film to see in the theater.

Interestingly enough 'Alpha' is rated PG-13. Seems the producers wanted teenagers and kids to watch this film with their parents. Sort of like a history lesson. History this early could have been portrayed much more brutally, yet we know what happens, and at times the over use of blood, and gore is just not needed, especially in this case.

Special congrats go to the animal trainer, who trained the 'wolf dog' for this film, if ever an academy award was needed for best acting for an animal, this is it! The dog matches shot for shot the actors moods and intensity. 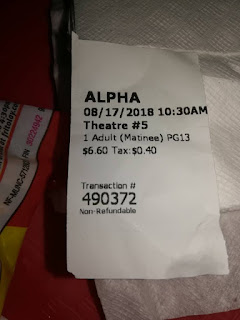 Above: My ticket to 'Alpha' Support films - go to the damn movies!

Overall 'Alpha' is a great film, very watchable, and actually has the intrinsic “I have to watch again” factor. 'Alpha' rates a very strong 8 out of 10. I am very interested in seeing if additional footage is on the Blu-Ray, as seems even more of a story was told, thus this is a def buy on home video.

For more information on 'Alpha' spear your browsers over to the official Facebook Page @ https://www.facebook.com/AlphaTheMovie/