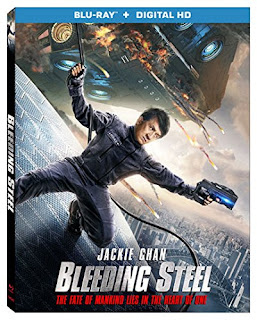 Greetings valued readers of Action-Flix and Dan's Movie Report! Once again we have teamed up to do a giveaway! Keep Checking back with both sites for details! One Blu-Ray per site will be given away.

John over @ Action-Flix.com posted about Bleeding Steel back in July ---

After hitting a massive home run with this year's action-packed drama The Foreigner, martial arts and action icon Jackie Chan is back with another exciting new import which is the Sci-Fi Action Spectacular Bleeding Steel.

The film is currently playing in select cinemas and is available to rent on all Digital Platforms but the film is primed and ready to be released this August from Lionsgate Home Entertainment. Check out the official Blu-Ray box art and trailer below!


A special force agent is assigned to protect a scientist and his creation from a sinister gang in Bleeding Steel, arriving on Blu-ray™ (plus Digital), DVD, and Digital August 21 from Lionsgate. This film is currently available On Demand.

Honorary 2016 Academy Award® recipient Jackie Chan plays Hong Kong police inspector Lin Dong, who learns that a biochemical invention has been surgically implanted into his missing daughter. With help from a hacker, Lin tries to connect the dots between the device, a sinister army, and a strange phenomenon called “Bleeding Steel.” Packed with nonstop action and thrills, the Bleeding SteelBlu-ray and DVD will be available for the suggested retail price of $21.99 and $19.98, respectively.

In an action-packed drama reminiscent of ‘80s techno-sci-fi thrillers, Jackie Chan stars as Lin, a police inspector in modern Hong Kong. While tracking down a deranged, mech-enhanced villain, Lin discovers that a geneticist’s lost biochemical invention has been surgically implanted into his missing daughter. With the help of a young hacker, Lin connects the dots between the device that haunts his daughter, his enemy’s sinister army, and a strange cultural phenomenon called “Bleeding Steel.”