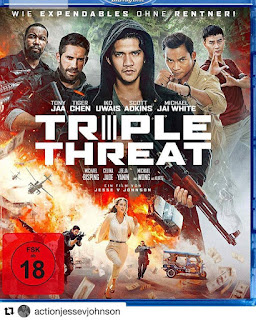 Update 1-23-19- Not sure if it is Official, as no German release date has been announced and Tony Jaa's Manager points out that Michael Bisping is missing from the poster and Tony Jaa is the lead and Celina Jade is the female lead. I sent out an inquiry to find out the full story.

My associate in action John Jerva over at www.action-flix.com has some new coverage with regards to this Well Go Entertainment film

OFFICIAL SYNOPSIS: A hit contract is taken out on a billionaires daughter intent on bringing down a major crime syndicate. A down and out team of mercenaries must take on a group of professional assassins and stop them before they kill their target.
https://action-flix.com/action-flix-home-page/the-action-dream-team-assembles-on-the-german-blu-ray-cover-for-triple-threat

John Jerva states: "f you didn't know already, the film also stars  Michael Bisping, Celina Jade, Jeeja Yanin, Jennifer Yang, Ron Smoorenburg, Michael Wong, and Monica Mok. We also know that the running time for the film is 96 minutes long. Action maestro Jesse V. Johnson helms the film and we are surely in for a rousing and high-octane display of fisticuffs and firepower with this one. Dare I say instant classic? This film will surely be one that we all will watch again and again. This is why slo-mo was created for Blu-Ray players my friends."

Watch for a massive push of coverage for this film, including cast interviews and contests once the film releases to DVD! Keep reading both sites Dan's Movie Report and Action-Flix.com for more further into 2019. 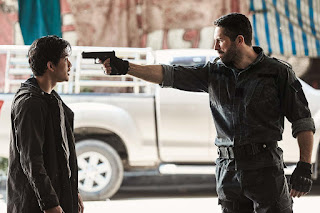 Well Go USA has an official page set up for the film, which should see a limited theatrical run if all goes according to plan. Jump Kick your browsers to http://www.wellgousa.com/films/triple-threat

Here is the teaser trailer: https://www.youtube.com/watch?v=TZlc95kwZ2o