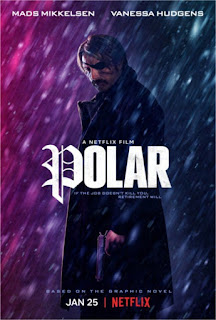 Above: Poster for Polar on IMDB - Used for informational purposes.

Greetings valued Dan's Movie Report readers. Netflix is a unique service. There, I said it. As soon as the Jonas Åkerlund film Polar popped into my feed I was like, it is Friday night, need something twisted to view after tackling my overgrown shrubs with a manual lopper. That aside, I was tired, a bit cranky, just the mood for this truculent and unabashed, violent spectacle.

Polar is Jonas Åkerlund 's attempt to channel is inner Q.T. ! Mixed of course with a dash of No Country for Old Men. Essentially this film is about a hit-man nearing mandatory retirement age, which is 50, yes no one wants a senile hit man! BOOM! Yes, they say that in the film. OK I know I am senile, now especially after watching Polar. The film works in some ways, but feels overdrawn in others.

Starting on the slightly negative side, the film is actually too long, I know, when is a 118 minute film too long, but it is. Hard to tell if it was to try to throw more action and torture in there, or was this meant for two cuts an R rated one and an unrated one, what was on Netflix was bonkers, probably the most sex and violence crammed into the same movie, since Irreversible, which was 96 minutes, and plenty long enough. The side characters, such as the owner of a shop, are in extended scenes, and some of them seem, unnecessary as the film makers want to force the fact that he is trying to live a normal life, but he can't and then we see gruesome flashbacks of his work as an assassin. I mean, after one or two or three we get it, actually one flashback was enough to convey the idea he was experiencing PTSD and there is a particularity horrible scene near the beginning, involving a dog, that was ridiculous, yes I am sure it happens, but come on, why at that time, prior to establishing his character.

Those negatives aside, ultimately I really enjoyed the ride, once the film decides it wants to send out a hit squad after him. A flamboyant leader like a semicircle in a suit decides that he is costing the “Company” too much and wants him retired for good. I must say, this is perhaps the craziest hit squad, in the spirit of the movie Se7en they are sent to his various residences looking for him and rather than leave whoever is occupying alone they find crazy ways to kill everyone.

This produces perhaps my favorite character of the entire film, Fei Ren, as Hilde. OK now she gets the villain right! She is not over acting she is breathing quiet insanity to the role. She reminds me of a mixture of Lucy Liu in Kill Bill, and Kelly Hu in X-Men 2. Trained assassins, yet seething underneath. She is tall and has a commanding angular presence. Of course Mads Mikkelsen as the lead protagonist, Duncan Vizla is great as usual, he is a total acting pro. His character goes through the gambit of torture and emerges, still ready to do battle.

Kudos go to Pär M. Ekberg he did a wonderful job as cinematographer. The audience is in on the action, everything is shot clean, up close, and clear, not in the shadows. We see and feel the violence and sex, yeah and there is a lot of that as well. I mean, I hate to be a prude, but wow, finally an action film where the sex scenes are not filmed with soft focus haha, It was raw and manic!

Whew, OK I am not going to spoil the story, plot, etc... damn I hate when reviewers do that! First of all, decide if you can handle the material prior to, if you liked Kill Bill, No Country for Old Men, and Irreversible, you will like this, if gore, extreme violence and nudity are things that turn you off, I would say "El passola!"

As a fan of this genre, this is an easy 7.5 thumbs up out of 10 thumbs, sometimes I am all thumbs! I will give Fei Ren, a 11 out of 10! She brought some sexy flair, as the cold, emotionless, yet intellectual villainess!

I mean Netflix is killing the game now with unabashed original content! This service is a must have! Go to www.netflix.com and sign up and log in! ------

Follow Fei Ren on twitter as of this writing she has under 1,000 followers!  https://twitter.com/Feifeiren
Posted by Dan's Movie Report-Danny Templegod at 11:44:00 PM