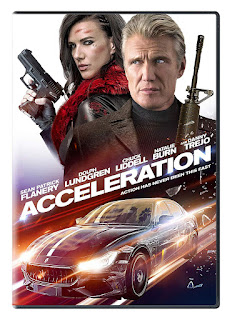 Above: Poster of Acceleration from IMDB (C) 2019 Cinetel Films

Greetings valued Dan's Movie Report readers. Thanks to Natalie Burn, I heard about the filming and eventual release of Acceleration. Natalie also serves as the film's producer and casting director, Acceleration has a rather simple plot of a crime lord Vladich Zorich played by Dolph Lundgren who is doubled crossed by Rhona Zyocki (Natalie Burn). Rhona must complete a night full of tasks in order to get her son back.

Acceleration is a decent action flick, with little wasted time. Clocking in at a mere 85 minutes even after the credits, the film progresses from one action sequence to the next with rapid fire succession. Amazingly there is an incredible array of action star cameos from Danny Trejo, Rampage Jackson, and Chuck Liddell. My only issue here is that all of them are in the film for such a short time, that none of their characters are given any backstory. Wonder Woman actress Mayling Ng, plays some sort of crime kingpin, and Natalie Burn is sent in one of her endeavors to eradicate her. As cool as this set up is, I wish the fight was a bit longer, and Mayling's character was explored further.

Acceleration has a good sense of urgency, never slowing down for a sappy love scene nor downtime. Sometimes the film is even too fast, sliding from scene to scene so rapidly the audience has barely enough time to catch up. My other complaint is the film, most of which occurs at night is so dark, that it is hard to see some of the action. For a low budget indie though, it is a bit better than most, and watchable. With each person Natalie has to encounter she seems to get more brazen and less concerned about what happens to her, more focused on the mission and getting her son back. This fact is often lacking on many indie films.

Natalie Burn is a solid talent, and she is constantly approving. She has a dark and sultry look, somewhat sweet, yet dangerous. This is a big starring role for her and she proved she is up to the task of carrying a movie. Natalie has obviously trained in fighting and gun play, and has worked on her acting skills as well. Obviously it is very difficult to produce and star in your own film, yet Natalie made a wise choice, as Acceleration serves as a great acting reel for her in future projects. I think she deserves a big shot at a theatrical film.

Directors Daniel Zirilli and Michael Merino serve as Acceleration's directors with Merino being the screenwriter. Zirilli is adept at directing action, and in Acceleration it shows. Acceleration has a bigger film feel, than it's small budget, and having a Maserati Sedan as Natalie Burn's transportation, some slick locations, and a solid cast of established stars.

Check out the shout out from the set for Dan's Movie Report:


Overall Acceleration has some pretty cool scenes and is worth a watch. The film rates a 7 out of 10, and Natalie Burn is a future action star in the making.

Relatively quick from the January production to the release in November, Acceleration is available now on Cinetel Films Check out the film on Amazon: https://www.amazon.com/Acceleration-Sean-Patrick-Flanery/dp/B07YQ9WXH9/ref=sr_1_1?keywords=Acceleration+2019&qid=1573276498&sr=8-1