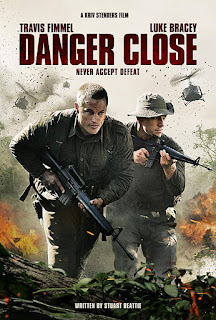 Greetings valued Dan's Movie Report and Action-Flix.com readers. As we fast approach Veteran's Day and Thanksgiving, I was given the opportunity to review an excellent war film 'Danger Close'. Saban films unleashes the film to the U.S. Market November 8th. Actually this film has been in release for a bit in the Australian Market, the filming location. With a robust 35 million dollar budget, time was taken to to tell the story of the Battle of Long Tan. The Battle of Long Tan is a real battle that occurred during the Vietnam War in August of 1966, 18 Australian soldiers were killed and 24 injured. Essentially, a major part of the story involves a demand of the major to fire upon his position due to the fact they were pinned by superior enemy firepower.

Although sensationalized with much of the back story, and embellished, 'Danger Close' really unleashes the grit and angst of war. Opting to start out with a bit of character building unlike the more in your face 'Saving Private Ryan' allows a more 'Hollywood Experience' yet the good side of this, once a character is killed or wounded the audience is in the feel moment. The movie actually starts with green new recruits coming to the unit, and an overbearing commander. Researching this, apparently someone involved in the actual mission is saying the commander was not actually like this, made me think, why would they alter it? My guess is for intensity of story. That said, it does make for an interesting delve into the actual battle.

Where 'Danger Close' shines are the amazing battle sequences, costuming, sound. The battles are filmed close in on the cast members, then pull back to show artillery fire from a rear battery of mortar gunners. Time was taken to show the guns, radios, jeeps, and artillery from the period. This is a damn epic battle film, even though some of the actors are obviously not very skilled with weaponry. The costuming is great and the uniforms are simple and well worn. When someone takes a hit, the team do a great job of showing the uniform tears along with the blood. What I really like is the blood is not over the top, the soldiers actually bleed rather realistically. The sound is really good, get headphones, trust me this film has some killer tense music and very good ADR on vocals and weaponry.


I will state that I watched the film on a full sized TV, not computer with headphones, that said, this film needed a theatrical U.S. Release. War films lose impact on small screens, I mean when this hits the streaming services, I can just imagine people being flummoxed trying to watch this scope on a 6 inch phone.


The acting in 'Danger Close' is alright, no one really detracting from the story. Travis Fimmel as Major Harry Smith is a standout, but there is no real Al Pacino epic monologues ha, 'Danger Close' is all about the war action. The interplay between the seasoned veterans and actors Daniel Weber (Private Paul Large) and Nicholas Hamilton (Private Noel Grimes) mimics real life. The young actors work hard to get into character.


Towards the end we see air support and very battle warn and rusty tanks, this level of realism was pretty bad ass. War is hell, and these vehicles have been through it. War films are no laughing matter though, especially when this battle really happened. Studying this battle in further detail due to the terrain, and lack of area mapping, seems like logistical errors were made in not doing some sort of air support mission prior to sending in such a small company of men to a forward position. 'Danger Close' shows this, the faults and foibles of this military action. Even though a small company held off 2,000 Vietnamese soldiers, almost once entire company was sacrificed.

The film expounds on the sadness with some slow motion and mournful music towards the end. Also in the beginning the film shows a band performing, trying to boost company moral. Actually these two items bookend the story of young men trying to have some semblance of life on the battle front.

Director Kriv Stenders is to be commended for wrangling the large cast, and Keir Beck, stunt coordinator is to be for some praised for some damn fine ratchet set ups along with some attention to detail. The ending credits show photos the actors side by side with there real life counterparts, which was really heart wrenching to see.

Despite some initial questionable embellishments, 'Danger Close' is lives up to the title, men in peril, with the overpowering enemy circled around them. The film rates a “harrowing firestorm of bullets” 7 out of 10.

'Danger Close' unleashes the firepower in the United States on November 8th. Look for the film on various outlets.