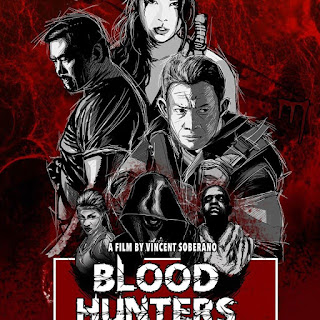 Greetings valued Dan's Movie Report readers, Thanks to Sarah Chang I was able to get an early screener of Blood Hunters: Rise of the Hybrids. The film had it's premiere at the 2019 Urban Action Showcase, and has won several awards. The film originated as a short film and has expanded into a feature. Actually Sarah told me initially it was supposed to be a pilot for a TV series. Vincent Soberano accents the comic feel with comic page transitions during the film, telling the story

Essentially Blood Hunters is a vampire hunting film, and clocking in at only 70 minutes, a very short one. Sarah told me that initially the film was supposed to be 90 minutes until it was edited for a TV pilot style length. The editing actually takes out much of the story elements and the film moves briskly from one action scene to another.

The story is a bit hard to follow with its truncated length, apparently there is a group of vampire hunters in an encampment who are training to fight the vampires. Sarah's character Gabriella is an unwilling member of this encampment and actually wakes up disoriented, not even realizing she is there. Normally a set up like this requires a backstory of some length and description, yet in Blood Hunters the audience is hurled into the story with the same malaise as the characters in the movie.

Transitioning to the training, Gabriella and other members of the encampment learn to fight, though it seems that most have some action and fight training prior. Jeff Centauri serves as the fight coordinator and keeps the fights moving fast, with more exaggerated movements for a comic book feel. Blood Hunters, although it has somewhat of a serious tone never feels like a somber movie.

Vincent Soberano as Bolo, has a important role, a last warrior guy, always showing up to save the characters from demise. Again though many of the fights in Blood Hunters were just too short and lacked the impact needed for the theme.

Sarah told me that although Mayling Ng had a small part in the film, she was basically on set only for one day and hardly had the time needed to do a proper fight. What should have been an epic fight between Mayling and Sarah turned into a 30 second quick cut action, that barely registered.

With all of my nitpicking it seems I did not enjoy Blood Hunters: Rise of the Hybrids, actually I liked it for the potential of what it can become. Again I feel that this is more of a series rather than a movie and this was just the set up and proof of concept to show potential networks what can be created. In the movie world, if you create a 90 minute project that is it, you get the distribution and then the company puts out the product and moves on to the next one. In a series, more time is taken to make sure that the story and elements are up to the standard for an 8,10, or 13 episode season, and that it retains the audience throughout. The short film proved that they could do a feature, the feature hopefully will set up a series.

Blood Hunters would be a great fit for Amazon Prime or Netflix as an 8 episode limited series. This way all of the characters can be properly explored and detailed back stories can be told. In the 70 minute film we never hear about where the characters came from except in very limited flashbacks. The good thing about the short run time is there is no wasted padding, just action.

The lighting, sets and music are OK, I kind of wish more time was taken on the look of the film. Many parts of the film were very dark, with the action being rather hard to see. I am sure with a bigger budget, either with a new feature or a series, the team will have the opportunity to hire more prominent set decorators and cameramen.

Overall Blood Hunters: Rise of the Hybrids, is long on action leaving the audience wanting to see more. As for a rating, I will say 7 out of 10, some issues I had are out weighed by the overall ideas behind the film and the potential it has.