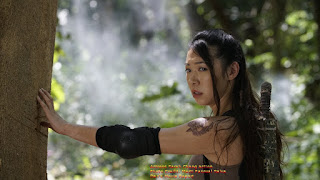 Photography credit: Marti Pascual Salva (All photos used with permission and are for promotional purposes only not monetized)


Greetings valued Dan's Movie Report and Action-Flix.com readers. Blood Hunters: Rise Of The Hybrids is premiering at the 2019 Urban Action Showcase, and lead actress Sarah Chang sits down and chats about her experience on the film. Sarah has an engaging personality and is driven to work hard and achieve success in the international acting world. This is our third interview, please refer to the links below to read our 2017 and 2018 interviews:

Dan's Movie Report: Chat about the script and comic book feel of the Blood Hunters.

Sarah Chang: Blood Hunters is based off a comic book Director Vincent Soberano drew himself, he based it off of the Filipino folklore he listened to as a child.  The story is set in a world where Aswang (similar to vampires) run the world, families are torn apart and people live in fear.  While most cower away from the Aswang, there are groups of mercenaries that hunt the Aswang to collect their blood for a dubious scientific research firm.  A team of mercenaries band up with and avenging cop and a notorious hybrid (a human with aswang blood) to take down the Aswang race once and for all.  While the entire story is created in an alternate universe, the movie flips back and forth between comic book panels and reality, much like Sin City.   I personally love that extra comic book feel.  It really allows you to delve into a different world. 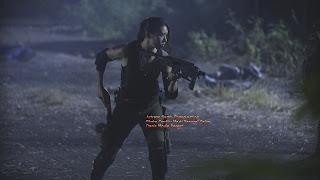 DMR: Perhaps describe a bit of the process that went into creating your character Gabriella, were you a bit nervous to take on the lead role in the film?

SC: For each role, I start my preparation with Uta Hagen's 9 questions to understand the character's circumstances.  At the time, that was definitely the only way that I felt comfortable.  Based on that, I delved into a state of anger and pain. As my first lead role in a feature length film, I was quite nervous to take on such a significant role.  It was even harder with jammed packed days and so much choreography.  As an actress, you always strive for that lead role, but when actually get that lead role, it's quite overwhelming and a really big responsibility.  Now that I've done several lead roles, I think I would have prepared in a different manner. 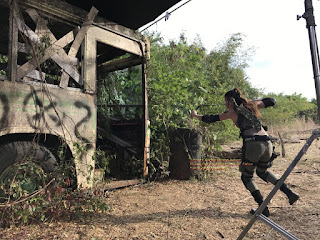 DMR: Actually this question is for Vincent but feel free to chime in, Chat about meeting with the Executive Producers and selling the idea of an expanded feature film?

SC/VS: Vincent was looking to turn his short film Blood Hunters into a TV pilot. After his short film won Best Action Film at UASE, he caught a lot of attention. Monsour Del Rosario, a popular action star in the Philippines, wanted in as the lead and also invested in the film. With Monsour signed as the lead, the project attracted funding from the likes of Hollywood entrepreneur Bob Romer, actor Stacey Michelon, TV producer Tonino Habana and film producer Oli Laperal. After Vincent finished shooting what he intended to be a TV series pilot, he was prodded to release it as an expanded feature film. 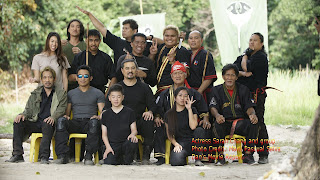 DMR: Jeff Centauri is a well known Fight Coordinator and I have had the pleasure of meeting him in LA in 2004, chat about working with him and crafting the action of your character. His style is more comic book with quicker fights and your style seems a bit different, chat about some of the ideas you had with regards to the action, and some of Jeff's ideas and how things merged together.

SC: With regards to the action choreography, we were really blessed to have a great team of martial artists to fuse together all of the very traditional Filipino Martial Arts.  That was the first time I had learned Filipino martial arts, so I was really thrust into a very demanding schedule to learn all the different styles.  I learned illustrisimo with Master Arnold Narzo, Modern Arnis with Master Bax, Balintawak with Master Patrick Balos, and trained Kali Arnis with Reviric Jocson, Jim Tulipas, Jim Lim, Angelo Estanol, and of course Wushu with Temujin Shirzada who played Naga.  It was a really incredible experience. These were the guys that really created the fight sequences. Jeff was very creative in his camera techniques, he used some really nice camera angles that complemented the choreography.  He also helped to adjust some movements to make them more cinematic.  Vincent was really hands-on and specific about the action cinematography and choreography, I think we all made a great collaborative effort.

DMR: Chat about having an action sequence with Mayling Ng, how long was she on set and chat about some of the choreography you worked on?

SC: I loved working with Mayling, she was so energetic and sweet the moment she jumped on the set. She was actually a late addition to the cast. Vincent had to write in her character on our first day of shooting, and additional funding had to be pulled in to able to hire her. Unfortunately, we only had a day to work with her because of budget constraints, so the choreography was quite short and simple. Vincent was actually making up her scenes on the spot, while we were shooting!

DMR: Chat about the dialogue in Blood Hunters, how you prepared for your role with emotions and body movements.

SC: There was actually three times more dialogue in the shoot than what was shown in the final cut because Vincent wanted the movie to go straight to the action. There was even a love scene, a dialogue with my screen grandson and some comedic lines.  Actually on the set Naga and I were in a constantly in character, we were basically in battle the entire movie. 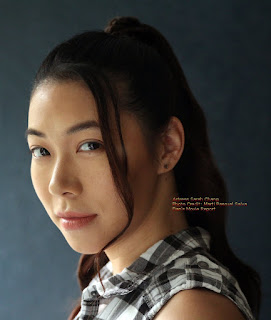 DMR: We spoke about the film being originally 90 minutes then edited down for a TV show to 70 minutes, which is what is the end result, maybe you can share with my audience what are some of the things missing from the original 90 minute film to the 70 minute film.

SC: Vincent cut out a lot of scenes with a lot of dialogue. I even played the role of a grandmother in a flash forward scene.  There were a couple of cute, comedic moments as well. However, a lot of these sequences tended to drag the story and take away the comic effect that Vincent wanted. He wanted the audience to have an experience like reading a comic book, not a novel. Thus, in the end he compromised and shaved out several scenes to push the action.

SC: I love working in the Philippines.  I was catered to the moment I stepped foot into Manila.  Everyone is always so happy and accommodating.  Also it's much easier to communicate in the Philippines because most people can speak English, albeit with a "nosebleed" as they call it. It almost feels more like a really great vacation sometimes.  Stay in a hotel, go to great beach locations, train martial arts, shoot, and repeat.  On the flip-side, not everyday is like that, it can be a grind when sometimes the set is too lax, and people are not doing their job quickly and efficiently.  There's a saying in the Philippines that is called "puede na yan" which means "it's good enough", which really lowers the standards because people just allow something to be half-assed.  I do see that happen on the set, that could be improved.  During Blood Hunters, I thought the wire rigging could be improved and then Vincent and I started our own action design and rigging team.  I think all countries have their pro and cons, it's all about how you deal with those problems.  We've just been fortunate to meet like-minded passionate people who are interested in pushing the action genre in the Philippines.

DMR: Chat if you can about upcoming projects.

SC: Next year is definitely going to be a busy year, we've got several of projects lined up.  I'm really excited for an upcoming Chinese Filipino co-production that I will be starring in with the same production team behind Wolf Warrior 2.  The director Ming Su has already made several trips to the Manila to start our tactical training and I can't wait until we start production early next year.

Thanks Sarah for taking time out of your busy schedule to conduct this interview. For further information on Sarah Chang, connect with her on social media and check out her 2019 reel: