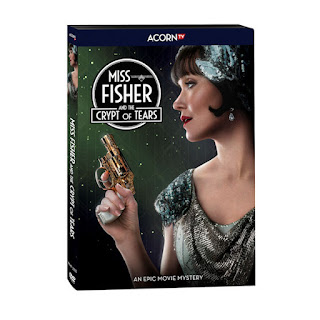 Greetings valued Dan's Movie Report and Action-Flix.com readers across my desk on Acorn TV comes 'Miss Fisher & the Crypt of Tears'. I had the opportunity to interview director Tony Tilse, for HBO's ''Grisse' a full on action series! http://dansmoviereport.blogspot.com/2019/01/director-tony-tilse-interview-grisse.html

For those of you unfamiliar with the original show, I suggest you watch the entire Miss Fischer series, or at least several episodes. Basically she is a clever detective, sometimes skirting outside and inside the law, she goes on some rather intriguing and humorous cases, with somewhat serious undertones.

Although most of the episodes run about 45 minutes, I always wanted to see what the team could create, in a long form. The latest effort, is a cool mix of Indiana Jones, Tombraider, all the while keeping the amazing charm of actress Essie Davis as the title character Phryne Fisher. In fact, nearly all of the original series cast has returned to some extent, a nice closure to the show, or will it be?

Writer and executive producer Deborah (Deb) Cox once again creates, the world in more detail with a larger budget, what is also cool and I did not even realize that part of this was crowd funded in Australia! A huge undertaking that supports thousands of film jobs in the country is needed especially now!

I refuse to spoil the plot of this because so many have not seen the original series, much less this movie. Actually I recommend watching most of if not all of the 34 episode original series, well at least sever of them to get an idea of the characters, doing this will make it a really amazing story. Essentially there is a small child in prison, and Miss Fisher needs to get her out and search for a mythical Emerald. Remember this is a mystery as well, a who done it. In the TV shows the murder happens in the beginning and Miss Fisher has to go back and solve it, minus, cell phones, and of course modern equipment. In the feature time is taken to set up the story before the murder takes place.

An amazing standout is newcomer Izabella Yena https://www.imdb.com/name/nm8962183/
she stars as the grown up woman. She really does a wonderful job of showing emotions and care throughout this film. Always wonderful to see fresh talent arise!

Special Kudos go to the stunt team in this film. Zoë Amanda Wilson works with Izabella's character to craft the action. Stunt Coordinating was done by two people Russell Frost and Othman Ilyassa. Both are super knowledgeable in a variety of action as the movie involves fighting, gun play, fencing, and falling as well.

The technical aspects of Miss Fisher & the Crypt of Tears are solid. The outside scenes and areas used in Australia are really nice, some minor quips about the CGI train perspective. Musically it is rather amazing as a 1920s style Jazz band was even used, plus the musical score really gave it the worldly feel. Another thing I really liked, is the lighting even in the dark scenes, we can see the characters and their actions. There is a scene that involves fire at night and I can see the faces, and emotions! Remember no spoilers!

I really liked this feature! Cannot find much fault of it at all, obviously it Is not a 100 million dollar Tombraider or 200 million dollar Summer blockbuster, overall it rates a very strong 8 out of 10, a must own!

The official page on Facebook has the entire show and series covered!  https://www.facebook.com/phrynefisher/
Support this project, buy it, buy merch etc...


It is available to watch now on Acorn TV or Pre-Order on DVD or Blu-Ray!
https://www.acornonline.com/XD5702.html
Ships May 13th!
Posted by Dan's Movie Report-Danny Templegod at 12:45:00 PM