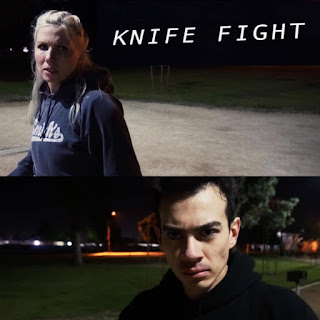 Greetings valued Dan's Movie Report and Action-Flix.com readers. Ashley Becciani has been on my radar for a few years now. Ashley is working hard on the front lines as a nurse, but of course she is always up for some action, especially at night.

Filming took place in late January 2020. Filippo Becciani directs with fight choreographer Shaun Charney crafting the action. Her combatant is Anthony Magallanes, and he has a knife! Ashley also recently worked on a Kill Bill live stage show as Uma Thurman's character! and had the opportunity to meet QT at one of the performances! The 1.5 minute short is violent, quick and dangerous, depicting what can really happen if a woman is assaulted alone at night. In Ashley's case she can defend herself, and heal those she hurts or are hurt! Be respectful to the ladies!!

Watch for more of Ashley on Dan's Movie Report and Action-Flix.com
In the meantime check out her official Facebook Page @ https://www.facebook.com/yellowhairdwarrior/
Posted by Dan's Movie Report-Danny Templegod at 11:38:00 PM