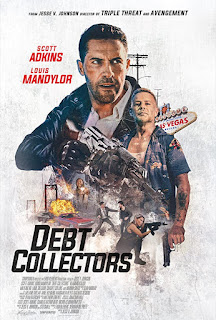 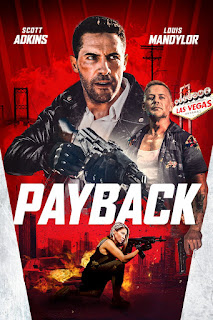 Dual Cover art, top (C) 2020 Samuel Goldwyn Films / bottom (C) 2020 Dazzler Media both photos are not monetized and all rights reserved to the two companies, again thanks for this!

Greetings valued Dan's Movie Report readers, I was given the glorious exclusive opportunity to view 'Payback' a shot at reviewing the U.K. Screening copy! In the United States the film will be entitled 'Debt Collectors'.


Please see my brand new interview with Jesse V. Johnson over on the Action-Flix.com site @


Please note, I am reviewing the U.K. Version so there will be no spoilers as with all of my reviews. Also please read my review of the first film, which I gave a 9 out of 10!


Essentially you have a continuation of the French and Sue saga. 'Payback' involves a road trip to Vegas to set off the film in motion, the best part is part 2 had a much larger budget, or so it seems, the scope of the film, felt bigger, fights were more epic. I know hard to improve on the original, but in most cases they did!

Here is what I really liked about 'Payback' the addition of twists and turns, the story is interesting, and plot thickens. I enjoyed all of the locations. Time was taken to do location scouting. There is a a particular scene, small spoiler, that involves Parkour, I will not say what happens, but the way it was filmed is great! Angles, people running etc... I could see everything not off in the distance. Luke LaFontaine who I plan on interviewing again, did an amazing job coordinating the action! One thing about Luke, he knows the actor's strengths! Much respect go to the new ladies in the mix, Mayling Ng, always a menacing villain! Marina Sirtis, who I met years back really was amazing doing a 180 and playing not an Empath so hah, she has stuff to say! Marina is exactly the opposite in 'Payback' as her real life persona, she is kind compassionate etc.. That said, Jesse was right I was blown away by newcomer Charity Collins, she was the craziest of the three! Her acting and natural ability are quite stunning, respect ladies, take three bows!

On to Mr. Scott Adkins, and Louis Mandylor, what can I say, Legends! Sometimes, legends have to fight it out! No Spoilers! There is good road banter that hearkens back to the early days of Hawaii 5-0 reboot, clever, yet crazy! Some true hysterical lines are when Marina Sirtis calls Adkins a Shoe Salesman! No more jokes! OK there are several!

Director Jesse V. Johnson, once again wrangles a bigger cast with ease! In Triple Threat, he got the most out of all of the characters! In 'Payback' he had to really push himself with a combination of new and veteran actors. I like the mix of characters. Quite honestly I had a bit of trepidation not bringing Selina Lo back but once again, he proved me wrong as this film had a darker aggressive tone, needed angrier ladies, Selina though was spitting mad in the first one! I kind of hope Selina and Mayling are brought back for part 3, cause, I need a swords vs staff fight! There I said it! Ha, evil laugh, but I know a part three is a given if this is successful! BUY the DVD!

Musically 'Payback' is excellent. Fitting theme music for the various action pieces! Sound editing is great as can cleanly hear the voices. Adkins really works hard on his vocal timing and humor not just his kicks and fists!

I have two very minor downers yet sticking points on 'Payback' I found that while the running time of 97 minutes was far too short, now the first one had a smaller scale so 95 minutes felt perfect. I wanted to see more of the gangs, the players, outside of French and Sue, I know but Danny, DTV films need to be 90 minutes or around that prior to credits crawl. In this film there is a lot going on and unless you watched the first film, will feel a trifle overwhelmed. The second one was a scene in a hotel room, where Sue and French are speaking, although the dialogue is great I feel that it went on a bit long, again, this is very minor, I would say take out a portion of that and add to learning more about various gang factions at play, and an additional 5-7 minutes to make this a 105 minute film!

I know why am I nit picking, well, I am giving the movie a kick in the balls 9.5 out of 10 rating ha-ha, I take only .5 cut for those two issues. I like the DVD cover art much better on the U.K. Release and it is a fitting title 'Payback' as in Germany the first one was called 'Payday'! If you are in the USA , Amazon has it for pre-order now comes out June 2nd, make sure you do order the first one if you have yet to see it! https://www.amazon.com/Debt-Collectors-Scott-Adkins/dp/B086Y4GYV2/ref=sr_1_1?dchild=1&keywords=Debt+Collectors&qid=1589860660&sr=8-1

Now in the U.K. 'Payback' Comes out Digital June 8th DVD July 6th. I will have more release information as it arises, Dazzler Media is releasing! Special thanks to Mike Fury, John M Jerva, and of course Jesse V. Johnson for making this review possible!
Posted by Dan's Movie Report-Danny Templegod at 1:00:00 AM