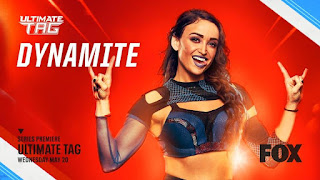 Above: Yessenia as Dynamite from ULTIMATE TAG! (C) 2020 Fox. Used for promotional purposes only

Check out the Social Media Pages For the show @ https://www.instagram.com/ultimatetagfox/?hl=en

Over the course of the next several months I will have several exclusive interviews with Yessenia! Stage one, is of course The new show! Stage two: Punisher! Stay locked to Dan's Movie Report and Action-Flix.com for more exclusives!


DMR Chat about Ultimate Tag, The new show hosted by JJ Watt. Curious if you can reveal how you were cast and how many weeks did it take to film?

Yessenia: We were going through the interview process, even before I was filming Exelton. In September of 2018 I had one of the show producers reach out to me through email, till today I have no idea how they found me, and they won't say it! (Ed Note-- http://dansmoviereport.blogspot.com/2018/07/miami-home-break-in-action-short.html ) Hmm I wonder also! They found me and just happen to know a lot about me, even what was not on the internet. http://dansmoviereport.blogspot.com/2016/04/actressproducer-yessenia-cossio.html
(hmm again I ponder this!)

They eventually passed me on to a few other interviewers. I felt the producers really liked me. They were looking for someone athletic, and with a personality, they felt comfortable with me. They told me they would be in touch in two or three months and December of 2018 came and I got booked for Exatlon and I had to leave in January and came back late February and they were trying to get a hold of me, thankfully after being eliminated from Exatlon I was able to get back to them in late February right on time! 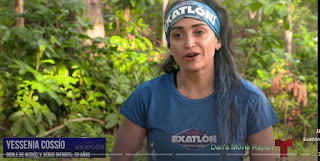 Above Yessenia on her previous show. (C) 2019 Telemundo used for promo purposes only.


DMR: WOW yes. Chat about how they contacted you.

They emailed me wondering if I am still interested in being a part of the show and I am like Oh my GOD yes! I remember them telling me the news over Skype, they were acting weird and mysterious, not really revealing what was going on. They asked me to go on a call at 5pm, then they said sorry for the delay can you go on a call at 5:30, then eventually at 6pm, I was like haha what the hell is going on, but I am assuming they are in a bunch of various meetings discussing the show. Well when I got on the Skype the first thing they said was “Welcome to Warner Bros!” I did not know what the TV show was for, what network, etc..., literally was surprised. I did not know it was for FOX did not know the production company. I just knew it was a TAG show, a basic summary and what they were looking for. Then they told me welcome to Warner Bros and it is for FOX network I almost fell back in my chair! I was so excited and shocked having just come back from Exalton and I had no time to get my mind and my body in sync, back to the level I needed to be. Actually it was a learning lesson for me in the sense of you always have to be ready, whether you feel like your ready or not! I am a vegan athlete and in the Exatlon show were were there were no menu options for a vegan athlete. I knew I had to recover from this really quick to get to this other show. 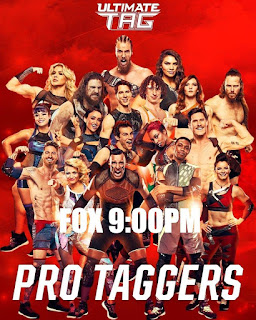 DMR: Chat about Ultimate Tag, and what it is about to you.

Yessenia: The Show is about explosive movements, chase, stamina, and resistance, so yeah it is like a dream come true for me. Seven or eight years ago I remember going on a tour to Paramount Pictures as a tourist just to look at the studios. Interestingly the lady guiding the tour said if you touch the gates it will give you good luck. Just make a wish and I promise you will come back. Either in a another studio as a tourist or even working for them! I am definitely going to touch the gate and make this wish and work hard towards it! I did not exactly shoot for Paramount but Warner Bros is an amazing studio I got to work with!

DMR: How was it to work with the cast?

Yessenia: It was a dream come true being in there with so many other amazing athletes, to be part of an extreme awesome show!

DMR: Chat about some of the specific training you had to do for this show and about what during the time in between downtime.

DMR: How long was the shoot?

Yessenia: We shot twelve days straight, yes that much! It was insanity literally! It was amazing and a fantastic experience. The athletes were were all really tired but very excited at the same time. We did get to do a few runs through the course before, but it was for only a few moments, you had to be ready to go right way. Either way it was an enjoyable experience watch it on FOX! Check below for this cool motion!


Thanks for part one Yessenia! Get ready kids the young action hero has much more to say, phase two is The Punisher!

Stay locked on Dan's Movie Report and action-flix.com for all exclusive content from Ultimate Tag and Yessenia!