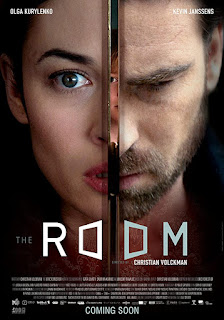 Above: Poster of The Room, from IMDB, used for promotional purposes only not monitized

Greetings valued Dan's Movie Report readers and lovers of very odd thriller films. Although 'The Room' came out in 2019, the service Shudder, has it now for streaming and I thought during these crazy times, what else could I possibly do than watch this off the wall flick. 'The Room' is at the core a film about dreams. A young, well relatively young, couple buy a fixer upper home to start a new life together.

The couple, Matt played by Kevin Janssens and Kate played by Olga Kurylenko are cautiously optimistic when they purchase their new home in a lovely countryside. Once settled in, they stumble across an unusual room. This room is a seeming gateway to endless wishes, and boundless wealth. All is not what it seems as the couple wishes for more and more outlandish items, including million dollars and priceless artwork, sadly once these items leave the house, they turn to dust.

I mean the plot concept is pretty amazing, but some of the execution is a bit flat, I wanted to see more of the couple's lives prior to getting in the house and some more day to day interplay. That said, I did enjoy the acting of Kevin and Olga, both actors had to really go through a serious amount of emotions. Anger, fear, frustration and Olga's uncanny motherly power comes to fruition in the third act of 'The Room'. Olga straddled the line of mother and protector, while Kevin Jame's Matt came across as a man descending into madness as the time in the house wears on.

The big wish, and I will say (SPOILER) is the couple wishes for the one thing they cannot have, a child, although I refuse to spoil what happens after they get this star/miracle baby, I will say you will not see this coming. The plot thickens and even becomes delightfully convoluted and confusing. Normally I would hate this, but in 'The Room' it works. The pacing becomes frantic, rules are broken and nothing is conventional, and Olga proves she deserves to be in these high quality acting films not just action flicks like Bond, Centurion, and The Courier.

I actually watched 'The Room' a second time to see what director Christian Volckman wanted to do from the original Idea he had to the collaboration of other writers. I mean there are some great ideas here, I kind of wish the team had a bit of a higher budget for the house, but, the film works as basically a single setting entity save for an insane asylum of a John Doe, who apparently lived in the house prior.

Overall I will recommend this film especially on the Shudder streaming service, and rate it a strong 7 out of 10! If you have Amazon Prime it is a 4.99 monthly add on. Either that or go to https://www.shudder.com/

Follow Olga Kurylenko on Twitter @ https://twitter.com/OlyaKurylenko
For more info on the Room check out the imdb page @ https://www.imdb.com/title/tt8485364/
Posted by Dan's Movie Report-Danny Templegod at 9:48:00 AM