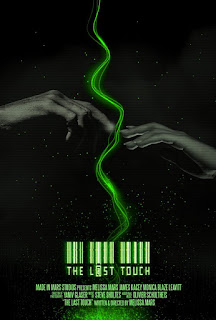 
Update: 11-8-2020: Greetings valued Dan's Movie Report readers, across my desk today comes a brand new film from the creative mind of Melissa Mars. The Last Touch is a four and a half minute slice into the realm of futuristic social media. This world there is no physical touching only a variety of interfaces on cell phones. Melissa Mars serves as the film's director, writer, and star. Her character Clea is conflicted as intimacy in this timeline has all been eliminated, replaced by a phone or a computer screen. Actor James Kacey plays Clea's husband Cain. Hardly an ideal life, especially during the current pandemic, the pair are next to each other in bed, but of course even the slightest touch could seriously injure or kill them.

The Last Touch is dripping with allegorical ideas. Melissa is conveying the frustrations of many today as the lock down has forced people not only to stay at home, but to refrain from human contact. Even when you go out shopping the experience is turned to a robotic avoidance, pick up your groceries, hardware, gas and go. Mars forces the audience to think what would a lock down of touch be like. Mars conveys a sadness, melancholy, yet a small glimmer of hope occurs toward the end of 'The Last Touch', or does it?

Sweet Cherry Corporation apparently controls procreation and in order to have a healthy baby the couple must bond with the baby, but only virtually, on a tablet.. Mars creates a world here that she would obviously like to explore further. Actress Monica Blaze Leavitt voices Sweet Cherry, a subtle yet haunting auditory reminder of who is in control. Leavitt reminds me a bit of the computer voice on Star Trek, except more comforting, yet the underlying tones suggest she is only nice when obeyed.

The Last Touch truly is a great example of how to start a concept. As a viewer, the more I times watched the film, the more my mind wanders into what was in the past, what will happen to the couple in the future, and the world around them.

All of the behind the scenes elements of 'The Last Touch' are very professional, clear audio from the actors, a hauntingly beautiful sound track by Steve Sholtes and Oliver Schultheis. Cinematography from Yaniv Glaser is tight and conveys the confine space of the film.

Overall, this is a fantastic example of exactly how to do a short film, give the audience what they want to see, and keep them watching by setting up a possible next step. Melissa Mars is quite a creative person, later in 2020, an interview between us will happen, keep it locked on your home for independent exclusives on the web, Dan's Movie Report!

'The Last Touch' will begin a festival run soon. Melissa shares information about the festivals on her official Facebook Page @ https://www.facebook.com/melissamars

Synopsis:
A young couple struggles to keep their love alive in a world where technology has replaced intimacy, and human touch is deadly.
Watch for more exclusives including an interview with Melissa later in 2020, on your home for independent cinema, Dan's Movie Report! 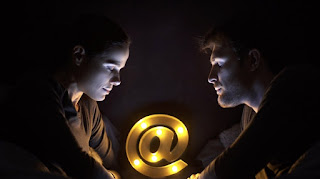 Above Photo: Clea and Cain look to the future in 'The Last Touch' (C) 2020 Made in Mars