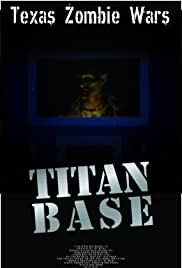 Above: Poster of Texas Zombie Wars - Titan Base from the Official Facebook Page.


Greetings valued Dan's Movie Report and Action-Flix.com readers. In advance of our upcoming interview I have decided to review a film Melissa Mars stars in called Texas Zombie Wars: Titan Base. The movie is part of a series of films in the Texas Zombie Wars series, which follows a group of soldiers tasked to clear the infected from a barren land. Actually Titan Base is currently streaming free for Amazon Prime members.

The first movie in the series Texas Zombie Wars:  El Paso Outpost is very slow moving, in fact most of the movie is recapped in the second film 'Titan Wars'. The second film has a better dialogue and interesting twist at the end involving Melissa Mars character Dr. Corsini. Much of the entire second film is a debrief of sorts from the first film, yet wraps up the initial story line.

Once again the pace is rather relaxed for a Zombie infected film, almost like they feel protected in their location. Actor Mikal Vega has more than two decades in the military, and his experience shows with his portrayal of Hooch, a hardened veteran of Zombie Combat. Director A.K. Waters seems to have his characters move through the film with a relaxed pace, I am not entirely sure why. Of course in the first Texas Zombie Wars there is copious zombie killing, but once they are on base, it seems like their guard is down, not as concerned as they should be about dangers lurking outside the encampment.

Above Photo: Is there a doctor in the house? Actress Melissa Mars as Dr. Corsini in Texas Zombie Wars - Titan Base (C) 2020  Blue Wolf Productions. Used for promotional purposes only.

Actress Melissa Mars character Dr. Corsini is even allowed to go for a jog unaccompanied in the early morning hours. Realistically in any other zombie film or war film, the doctor would never be allowed to travel alone, but Melissa Mars is a tough no nonsense doctor right? Later in the film we find out how tough she really is!

With much of Titan Base occurring in an small room with real life Navy Vet and Private investigator Jennifer Marshall looking menacing with her icy stares and condescending tone. She is a pretty good sinister type lady named Lane.

In Texas Zombie Wars: Titan Base, even though the cast has much military experience, it seems like they are hampered a bit by the direction. Zombies are scary, or are supposed to be scary, especially when the audience, nor the characters in a film do not know their true power. I liken the the film playing a video game advancing foot by foot instead of running in after the enemy or running away. Yeah zombies move slow, all the more reason to be fast about it.

The final twenty minutes in Texas Zombie Wars – Titan Base are really good and make up for perhaps about 75 percent of the trivial beginning and slow moving interview sequence. Melissa Mars is a true shining star here and elevates the film to a respectable grade, worthy of a watch, especially if you have Amazon Prime. Her character changes and adapts to her surroundings, no more spoilers, but watch it, as adorable as Dr. Corsini is, she can be deceiving.

Texas Zombie Wars: Titan Base is a rather average film with an above average ending. Hard to put a rating on the film, my best guess is about 5.5 out of 10. If the entire film was shot at the pace of the final act, the rating would be elevated to a 7 out of 10. For a free Halloween watch, not a bad effort on the limited budget.