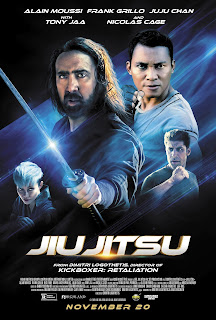 Above: Jiu Jitsu official poster (C) 2020 The Avenue (Used for promotional purposes only, not monetized.)

The trailer looks interesting, like a mixture of Predator and District 9 with a martial arts, The good folks at The Avenue are releasing the R rated 102 minute film in theaters and on demand, and digital on November 20th, 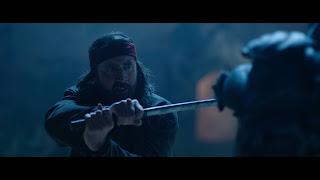 Above: Nocolas Cage with a sword! (c) 2020 The Avenue  (Used for promotional purposes only not monetized.)

As far as plot, a short description: An ancient order of Jiu Jitsu fighters faces a vicious race of alien invaders in an epic battle for the survival of Earth.

I found a longer description: An ancient order of expert jiujitsu fighters faces a vicious race of alien invaders in a battle for Earth every six years, but when Earth's hero is defeated by the leader of the invaders, the future of humanity hangs in the balance. The trailer describes a comet opening a portal!

The movie was shot in Greece, should be interesting how the landscape was used as well!

I am curious to see if some of the characters and twists and turns! Should be loads of fun and action!

Watch for film review in November along with other surprises, and a new interview from actress JuJu Chan about her character and the working with Tony Jaa and Nicolas Cage! JuJu mentioned that she had just wrapped production on the film in our last interview! https://action-flix.com/2019/08/30/dans-movie-report-interview-juju-chan-talks-wu-assassins-and-more/