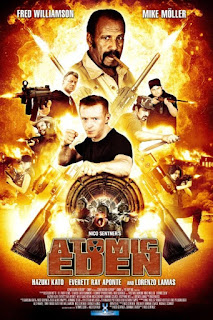 Greetings valued Dan's Movie Report and Action-Flix.com readers. I just spoke with the director of 'Atomic Eden' starring Fred Williamson, Mike Möller and Hazuki Kato. He has informed me that the film is now available to stream on multiple outlets even free on the TUBI platform for a limited time.

'Atomic Eden is a non-stop action film, A small band of elite fighters take on a seemingly endless amount of hazmat suit bad guys in a balls to the wall violent affair set in the backdrop of the Chernobyl ruins.  Normally I would be hyper critical of a film with a very sparse plot and limited dialogue, but in this case the fighting, gun play and action are the main focus.

Fred Williamson plays Stoker - The Leader. Stoker is a ruff and hard man with bad intentions, killing fools all the while with a cigar in his mouth. He has seen it all, and Williamson seems to be at home in this sort of role.  Far more than a cameo, Williamson chews up the screen same as his stogies!

A few of other interesting characters including Möller's David - The Fighter. David is the de-facto in charge go to man for the hand to hand arts. Never shying away from a fight. Sultry Hazuki Kato plays reiko - The Samurai, with vim and vigor, splashing her outgoing personality along with vicious action on screen. Wolfgang Riehm plays Heinrich - The Priest. A man with a sordid past trying to move past it by wrapping himself in biblical attire and scriptures. He and Williamson have a well acted dialogue scene in a church, kind of setting the stage for things to come.

The action of Atomic Eden is clear to view and well filmed, we see the fights, no fast edits or odd camera angles. Bigger budget films could  learn a thing or two on how to position the camera during fights.With Mike Möller stunt coordinating, the cast seemed to be working as hard as they could on their action sequences, and the fights were set up to use their strengths. I liked the fact that even though the fights were not super long they were creative and varied.

Writer/Director/Producer Nico Sentner obviously worked hard to bring his vision to life. 'Atomic Eden' has elements of action and a small amount of near future science fiction. If you are into fighting films and gun play 'Atmoc Eden' is for you. Overall, even with a thin story and minimal plot developments, 'Atomic Eden' delivers a whirlwind of flailing fists and blood soaked bullet hits, more than enough for an evening's entertainment, and rates a 7 out of 10.

The movie is available on virtually every North American outlet, including, TUBI, Amazon, VUDU, Microsoft etc...

Stoker – “The Leader” (Fred Williamson) is a mercenary with a mission. In order for him to complete this mission, he will have to assemble a team of not only the best in the business;he needs people he can trust. He calls in a few favors and assembles the toughest, most badass group of mercenaries loyalty can buy. With David – “The Fighter” (Mike Möller), Reiko – “The Samurai” (Hazuki Kato), Darwin – “The Texan” (Everett Ray Aponte), Heinrich – “The Priest” (Wolfgang Riehm), John – “The Sniper” (Nico Sentner), Brenner – “The Blade” (Dominik Stark) and Laurie – “The Rookie” (Josephine Hies) by his side, the mission should be a breeze. It quickly turns into an un-winnable battle with eight people battling against eight hundred, all vying for control of a doomsday device lost during World War II. With the odds stacked against them, they're ready to risk life and limb to save millions of lives.