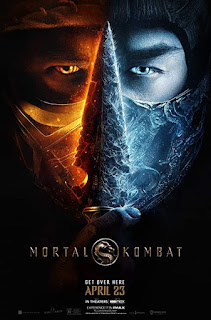 
Greetings valued Dan's Movie Report and Action-Flix.com readers. Since the new 'Mortal Kombat' film seems to illicit much discussion, I will throw my two cents to Outworld. This will be a short review devoid of spoilers!

First the good. Finally an R rated 'Mortal Kombat' property with proper finishing moves, actually it has a video game feel. There is copious blood and gore, like the video game series. I also liked that some attempt was made at an origin story to some of the characters. At nearly two hours, 'Mortal Kombat' had a bit of time to develop, which made the end more satisfying. Kudos to the action team making the fights diverse and entertaining. Kudos to the entire stunt team, some crazy wire-work by Tara Macken as Mileena's double. The inventive use of weaponry in the fights are also a standout. Actor Josh Lawson as Kano absolutely killed with his sardonic humor and acting. Experienced actor Hiroyuki Sanada as Scorpion and Joe Taslim as Subzero, got in some great lines and fights as well. All of those characters leveled up as they learns about their powers. Lewis Tan as Cole was great as well, kind of exploring. Seems more time was also taken in their stories. The Special effects team was amazing, given that this is a 40-50 million dollar film not 150-200 million Sub Zero's entrance to the city spectacular. For this reason alone, I recommend a theater.

With regards to the bad, it seems like an inordinate amount of time was spent on Earth Realm, would have liked to see more of a balance to flesh out the bad guys. While the fights were pretty amazing, the editing and quick cuts made watching them a blur especially as they decided to stack multiple fights at once, cutting between them. Also camera placement could have been better, some fights cut to a far distance, and some were so close, somewhere in between is the sweet spot. I am a fan of playing Sonya Blade and Mileena in the video games, sadly I just was not feeling the acting ability of Jessica McNamee as Sonya and Sisi Stringer as Mileena. I actually do not fault the actors as much as I do the source material and direction. The ladies just did not bring the frenzied intensity that was needed. First time feature film director Simon McQuiod was in over his head in directing even though he tries his best. I am sure he will improve. When you couple a new director with new actors, the result is often not great.

On to the average, transitions between scenes were decent but not amazing, even if the movie was a few moments longer, better in between sequences. Sometimes it just cut to the next scene, sometimes a scene went too long. I liked parts of the musical score, but at times the music just was not powerful enough to convey the action. The dialogue, was at times very interesting, at times just boring, actually the comic relief of Kano was appreciated.

Overall, 'Mortal Kombat' (2021) is worth a watch if you are a fan of the video game and the R rated violence. Though far from perfect, the film was an escape from the reality of life on Earth Realm in 2021, and rates a 6 out of 10.