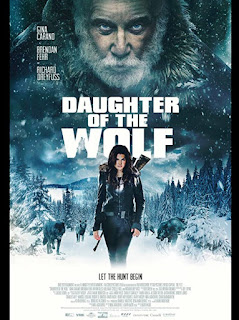 Greetings valued Dan's Movie Report and Action-Flix.com readers, another “Rapid Fire” review! Thanks to the folks at Dazzler Media, comes a brand new film starring Gina Carano called 'Daughter of the Wolf' Gina plays a mother that has a son kidnapped and the audience is kind of thrown into the action. Right off the bat she is asked to provide the ransom money of course she is hesitant, but does so then she is double crossed. Literally a bat-S@#t crazy shoot out and car chase takes up the first 11 minutes of the film, followed by a trudging through the snow with a member of the kidnap party in toe.

On the other side of the ledger is a Richard Dreyfuss, who is as white as the snow, a grizzled old man wanting the money and moving her son along with some henchmen to evade wolves in the icy forest. The second part of the movie is more tense, not as quick moving, but effective nonetheless. Brendan Fehr plays the kidnapped bad guy who Gina forces to help her find her son. He does a good job of playing both sides, more likely than not to save his own hide.

Gina does a good job with the emotional as well as the physical in 'Daughter of the Wolf'. She is anxious, angry and shows real concern. She has come a long way in acting since 'Haywire'. As a writer, I could care less what a person's beliefs are, I just want to see a growth in an actor and a decent movie.

The scenery is really amazing, being in Florida, I obviously do not see snow, bur the movie makes it a point to show the snow, on the ground, falling, and ice covering various items and encampments. The trees are plentiful and It is nice to see a film stuck in a green screen or matte painting motif. The rolling hills and various terrain changes make for particular challenge for all involved, thus adding to the excitement. The adding in of the wolves allows for a third element, that is a danger to all involved. I was reading that due to certain delays the riverside scene snow had to be added in, and to be honest, It did not effect the quality of the film much at all.

Camera work, lighting, and music are all solid. The scenes outside are clear and easy to see, Obvious time was taken to frame each scene and action sequence seemed well planned out. The action in the beginning rivals bigger budget fare and hooks the viewer in. Acting was decent, nothing detracting from the film. The actors all seemed to get the emotional aspect, and fear when needed. Director
David Hackl seems to have a handle on the proceedings and keeps the action and dialogue flowing smoothly.

My only small complaints were the length of the film at just 88 minutes including credits crawl, it almost feels like I walked in 10-15 minutes late to the start of the movie. Would have been nice to see a bit of home life with her and her son prior not just 30 second flashbacks, and perhaps some additional motivation behind the kidnappers.

Overall; I must say, I was expecting far less, and I was wrong. 'Daughter of the Wolf' is pretty good and worthy of a rent or own and rates a 7.5 out of 10. I see some hate regarding this film, I just cannot figure it out, hey maybe I am used to watching independent movies,

Dazzler Media releases 'Daughter of the Wolf' May 3rd 2021 to the UK! For further information: https://business.facebook.com/Dazzlerfilms/