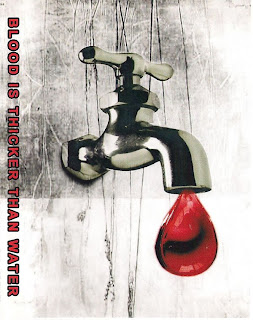 Above Pic: Poster for Blood Is Thicker Than Water


I am always on the lookout for interesting short films to review. With the advent of Youtube a plethora of them are available for watching and all one really has  to know is the title and possibly the year the film was posted.

Blood Is Thicker Than Water was not a random find, although it is on Youtube, but one shown to me by the film's producer and lead actor Rod Johns. The film was part of 2010 NZ (New Zealand) 48 Hour film festival. This was a high pressure project, as the cast and crew of all of the films had to get the  compulsory elements of the movie at 7pm Friday and hand in a completed projected, edited and ready for broadcast Sunday at 7pm. For purposes of simplicity I am shortening the title to BISTW for the remainder of the review.

BISTW starts out as an innocent film with two young ladies waiting by the side of the road. One does not want to wait till the end of the day for the bus, and she decides to hop in a van with Sidney Manson (Rod Johns). As the day goes by, inexplicably the van pics up other hitchikers, one guy who is a guitarist, and one guy who's vehicle has broken down. We never see where they go, nor what happens to them.

A sexy Russian girl Sharon (Iana Bikoulova) adds a spark to BISTW while she is trying to hitch a ride. In tight shorts and snug top, sulty Sharon enters the vehicle chats up with Sidney while the van passes the same stretch of road where the first girl was picked up! Iana is pleasurable to look at and has a keen grasp of facial expressions as the scene shifts from innocent chatter to terror. As a side comment, Iana looks like she could put up quite a fight if attacked.. (Note to self: don't mess with her.)

No More spoilers, but this film has obvious horror undertones, Charles Manson references and is an interesting 7 minute concept to film, on such a short time period, with a minimal cast and crew. Some problems with sound in the beginning, rather awkward dialogue and interplay from the first two ladies do not detract from the creepy story and amazing camera work in BISTW. Director Andrew Gillingham, and Rod Johns deserve a bigger budget project to hone their craft, a job well done. The technical aspect of the film was solid, it was filmed on the Canon XL1 and XL1s cameras. Rod told me he got about three hours of sleep during that 48 hour filming period!

The entire film is available on youtube @  http://www.youtube.com/watch?v=q0RDFqe_-m0
Posted by Dan's Movie Report-Danny Templegod at 8:32:00 PM