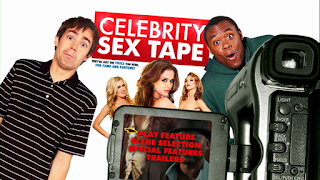 Above Pic: Screen Cap from the DVD menu.

The film has copious amounts of nudity, and the ladies are rather good looking. Celebrity Sex Tape plays out like a comedy, but often the jokes fall flat, but did I mention the excessive nudity. Emily Addison is very cute but her acting ability is tepid at best which is fine, cause she is there specifically for the scenery haha!

Plot holes and lack of story are to be expected, but I do give this an solid B for boobies haha.  Celebrity Sex Tape is not the worst film from The Asylum, but far from something in the Ben Hur category hahaha. I rate the film a 4.5 out of 10, and it also has a couple of nice extras, with a gag reel, and behind the scenes. The film is available from Amazon and ships February 14th.