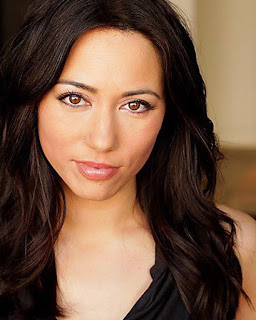 Lisa-Marie Long took the chance and relocated from the UK to sunny LA to pursue her dream of acting. Now several months into her journey she chats about her work on the film The Hike and her future goals and Desires. No more of my rambling on lets get right to Lisa-Marie.


Must have been fun to work on The Hike, how did you get the part? Describe your audition.

It was fun. The others girls and I grew really close over filming so it was kind of like a really messed up summer camp.. Over Winter! Because I was involved at a quite an early stage, the character was actually written with me in mind. That said I still had to audition for Rupert and Ben to prove I do the character of Ellis Justice.

Did you audition for other parts it the Hike or just the character you played?
Just the part I played.

With all the nights must Zara described it as a difficult shoot what's your perspective?
It was difficult and damn cold too at times. But you just suck it up and get on with it because you're happy to be working and you don't want to let anybody down. Making a movie like 'The Hike' is such a collaborative effort that you really are all in it together.. You sink together or you swim together. We got through a LOT of penguin bars and coffee!!

Do you enjoy horror films? What is your favorite genre of film to watch in general?
I am a total techno geek so Sci-Fi is where my heart lies. I'm not ashamed to admit I watched all of the Stargate Atlantis series and pretty much every Sci-Fi movie ever made. 'Primer' is an awesome example of how quality sci-fi can be achieved on a micro budget! Actually talking about Stargate Atlantis.. I met Jason Momoa at a party last night. (Pardon me whilst I name drop) He's very pretty. But bloody tall and not so great when you're trying to watch the game and he's between you and the screen..
I see you are an avid poker player, what got you into the game? Phil Hellmuth or Jennifer Tilly? haha
LOVE Jennifer Tilly, I've interviewed her a fair few times. She's always so sassy and chatty. What got me into poker was love of the game and randomly getting a job presenting The partypoker world series at short notice because the presenter they were initially going to use managed to get herself sent straight back to Vegas upon landing. From there I made some great friends including Mr Norman Pace (Of Hale and Pace) who took me under his wing and coached me. He and his wife Beverly are crazy about the game as are their two sons and that enthusiasm was infectious. Although it took for a while for me to start winning my money back!

How long ago did you relocate from the UK to LA? Was the decision entirely work related, or was it partly a climate and change of scenery decision?
All of the above. I've been here 4 months now and I absolutely love it. The lifestyle and the industry here is just so more conducive to success. I'm already getting auditions for the type of shows I'd never had been seen for after this long in the UK.
Skydiving, 8 solo dives, are you a bit of a daredevil? Are you ever interested in being a stunt double?
I like trying things I haven't tried before and challenging myself but I do have a very healthy survival instinct so I know my limits! I do like to push them though...


Pretty cool idea with Skype live chat short film Anna that Matthew Solomon had, how did you get involved with the project?
Matty and I had been chatting over skype along with his business partner Killebrew Mason although I knew them separately at first and it took a while to work out we were all connected!
We all get along so well and are so passionate about what we do that it was inevitable we would do something together once I'd moved out. When Matty sent me the script for Anna it was such an innovative concept, I just knew I had to be part of it.. So we filmed it over one day pretty much with me in London and them in Los Angeles.

What is your opinion of the impact of the social media sites like facebook, twitter, and the rise of instant communications like Skype?
The joy and failure of social Media is that it can be pretty much whatever you want it to be. For me it has become an extension of myself, a means by which I can reach out to people and they can reach out to me in a way that just would not have been possible or appropriate before. It's a middle ground. A platform to give or receive as little or as much of yourself as you are willing to that can impact others in a real, honest and meaningful way. In a practical sense it means that distance is irrelevant.
What is upcoming for Lisa-Marie in 2012?
The wonderful thing about the life I have chosen for myself, and every actors waking nightmare is that you never know what is around the corner. I'm loving being in LA, taking classes, meeting with Producers/Casting Directors and collaborating with friends. So more of the same hopefully. Also I'll take a series regular in any pilot that get's picked up too please!!

That completes the  Dan's Movie Report interview. For more information on this cute and talented actress. Watch for more news in the future, for now slide your browsers over to the following sites @