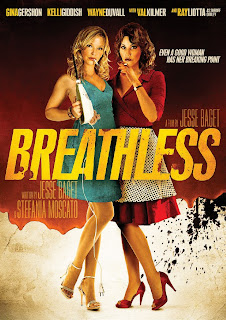 Above Pic: Poster for Breathless

Not sure where to begin on this sardonic tale of lies, deception and cold hearted coverup. Sultry bad girl Gina Gershon portrays Lorna, a woman scorned by her cheating husband named Dale, played by Val Kilmer.

Not only is Dale possibly two timing her, he also robbed a bank and got away with 100,000 dollars and Lorna, and her friend Tiny played by Kelli Giddish, tie him to a chair and try to force him to divulge the location of the cash, he does not give it up. (Minor Spoiler) A careless brandishing the revolver accidentally shoots Dale in the head, the rest of the movie is spent with them trying to disposed of the body, all the while Sheriff Cooley (Ray Liotta) is camped outside their dusty old trailer waiting for a warrant to search the house.

I really wanted to like this movie more, as I enjoy the work of Liotta and Kilmer. Gina is always a treat to watch, sadly though, even with the southern drawl, a slow moving plot, and lack of interesting side characters made Breathless a very average flick. The humor was only mildly amusing and after a few moments even gets annoying

The entire film is set inside Dale and Lorna's trailer. At times one location films are entertaining, but Breathless felt confined, actually would have liked to see some type of chase, interaction with other characters etc. The script just did not open up, and allow the full use of the great acting.

The acting is very good all the way around, Gina's southern drawl is fun at the beginning, she is a great talent, should have had a string of big budget films. Odd roles like this suit her. She has a lot of dialogue and pulls it off. Ray Liotta is solid as the Sheriff. Kelli Giddish, is surprisingly diabolical when given a chance to show her abilities.

Overall, I rate Breathless a rent, 5 out of 10. This is a one time watcher, the odd ending needs only to be witnessed a single time, sitting through it again will be tedious and rather pointless.

Amazon has a good price on Breathless, for sale, otherwise rent. Click the link below.