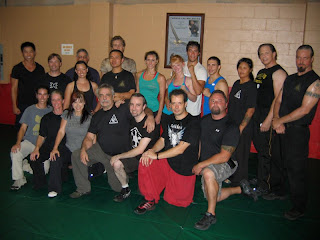 Above Picture: Group shot of all the attendees of the TLM Cynthia Rothrock Seminar, photo credit: Danny Shamon

On Saturday August 11th in Orlando a dedicated group of prospective film fighters gathered for a memorable 4 hour seminar conducted by martial arts champion and legendary film icon Cynthia Rothrock and experienced stunt co-ordinator Jeff Moldovan. The event took place at the TLM Fighting Chance Safehouse. The unique 5,000 square foot facility that features a natural environment, as Jeff teaches his unique defense style in a real world setting. Included in the "house" are a bathroom, kitchen, bedroom, living room, bar set up, desk, and even bay doors for vehicle access. Jeff stresses the ability to use "found implements" as weapons.

The beginning of the seminar featured Cynthia instructing the attendees her unique way of preparing for a workout, with a series of rapid fire stretching exercises to flex tight muscles, ranging from back to arms and legs. Cynthia's pre-workout stretch added intensity and cuts down on the time consuming aspect, by using body resistance and positioning to allow for a more complete muscle and joint loosing.

Following the initial warm up, Cynthia instructed the class to pair up. She separated the ones who were more experienced, from the inexperienced, and challenged all of the pairs to set up a film fight scenario. 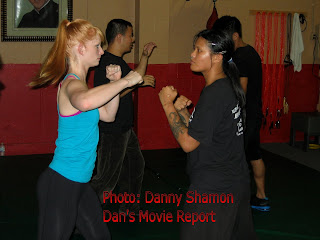 Above Pic: Adorable and talented Heather Wallace and April Montallana prepare to throwdown at the seminar. Photo Credit: Danny Shamon

Cynthia focused on each pair and spent several minutes with every one of the participants. She stressed "selling the action" not just with physical action, but with facial expressions. By taking time with everyone, Cynthia really worked hard to hone the skills and focus all of abilities of the participants regardless of experience level.

The fighting scenarios ranged from a few moves to a detailed full fight scene. Jeff Moldovan showed off a few moves he created for Charlie's Angels and other films as well.

Cynthia was careful to allow the participants a few five minute breaks. In fact she had a sit down instructional session in the middle, allowing everyone to relax and ask her questions about her career and any aspects of the industry.

Being an observer of the seminar not only allowed me to watch Cynthia and Jeff to work, but also see how the instruction was put into practical use developing and perfecting a fight scene. 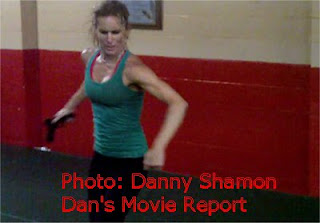 I enjoyed the work of talented stunt woman Mandy James Morgan. Mandy is in top physical shape, has a clear, powerful speaking voice, has world class experience in rhythmic gymnastics, and has been featured in more than a dozen films and TV shows. Jeff Moldovan taught her this ultra cool disarm technique, check out this cool video on youtube @ http://www.youtube.com/watch?v=KKw3T2jr7AI&feature=youtu.be  To learn more about her check out Mandy's official IMDB page @ http://www.imdb.com/name/nm1222288/ Watch for more in the future from Mandy on Dan's Movie Report.


I enjoyed watching the development of Heather and April's fight scenario, with guidance from Cynthia, and a bit of practice the ladies brought some sultry violence to the day's proceedings, check out this video on youtube @ http://www.youtube.com/watch?v=qix4XHKsZwE&feature=youtu.be

Both ladies are really talented. In addition to her TLM training, April plays in a cool metal Band called Auditory ARMory. Check her out on Facebook @ https://www.facebook.com/auditoryarmory

The flexible Heather Wallace has a wealth of dance experience, and coupled with her great flexibility, and pleasant attitude proves her skill to be a natural to work as a stunt woman or actress.

Actually, all of the attendees worked really hard, even those who came in with limited experience were able to learn valuable information on how to train for, and set up, a fight scene.

The ladies brought their A game, proving a new generation of stunt women has arrived! the guys used their imagination even bringing weapons to the training! Overall a great event, following the event a group of us including Jeff and Cynthia went to dinner and shared stories, a great night.