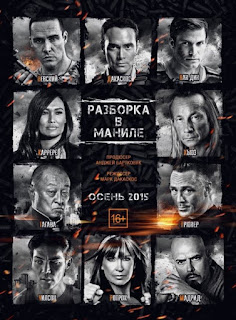 Above Photo: Russian Poster of 'Showdown in Manila' on IMDB


Greetings Dan's Movie Report readers, from the new film pile comes 'Showdown in Manila'. With the quality talent of Mark Dacascos I had rather high hopes for this effort based loosely on the 1991 flick 'Showdown in Little Tokyo'. Sadly these hopes were dashed quickly with very questionable dialogue, some rather uninspired acting, and a disjointed plot from the quartet of writers lead by Craig Hamman. and Alexander Nevsky.

'Showdown in Manilla' is Mark Dacascos's first directorial effort. This fact alone allows him leeway in the quality of film, and the overall film making experience. Notwithstanding, usually first time directors have many hands helping them, guiding them along the way, sadly 'Showdown in Manila' appeared directionless.  The film does not know what it wants to be, is it a sordid drama of kidnapped young women, a revenge plot, or one man's focused effort to take down an evil man? 'Showdown In Manila' opens with a small band of mercenaries scoping out a truck full of young women looking to be either sold or trafficked. Then we are introduced to the other above mentioned actors, in a mish mosh small intro, then boom we have more action, but not the kind of cool action, like disjointed, why are they fighting action. My respectful advice, as I think Mark Dacascos is a real talented actor, is to focus on one story, and time efforts, and focus on a couple of characters rather then throw a hodgepodge in there.

The second major issue of 'Showdown in Manila' is the dialogue from the script and the tepid uninspired way it was delivered. There is zero sense of urgency, almost like each member of the cast is reading from cue cards or screens above them. 'Showdown In Manila' needed depth, anger, aggression, fright from the ones who were threatened. Sadly it never materialized. Again respectful advice focus the efforts to a couple of lead actors, give them the background story, so the audience is engaged.

The third major issue I had was with Tia Carrere. Sadly, she was ill prepared mentally and physically for this role. She is a beautiful woman, that unfortunately has allowed herself to virtually fade away. While she never was a award winning actress, she was really great in Wayne's World, and looked to have a bright future. In 'Showdown in Manila' she is basically the female lead, and really made the film difficult to watch. I know she can be better.

Finally, why the hell establish and assemble world class martial arts talent in an non martial arts, 'Expendables' style film. "Showdown, could have been perhaps the greatest assembly of experienced martial artists on film, instead, we get guns, grenades and, a guy saying; "I brought many things that go boom!" Yes, I know a classic line from a 7 yr. old boy, not working in an action film. What is the Facebook term, SMDH?

On the positive sides of 'Showdown', during the small fights sequences, they are well lit and visually well filmed. The scenery was lush and green, most of the action takes place in the bright daylight hours, thus it is easy to see. One bright spot in 'Showdown in Manila', sadly does not a decent movie make.

I really wanted to like the film as I respect and admire virtually everyone in it, from Cynthia Rothrock, Don Wilson, Mark Dacascos, Cary and Olivier etc.., but I just cannot recommend it unless, it is on a service you own, such as Netflix or Amazon prime etc.,, 'Showdown in Manila' rates a tropical bomb, and a 3 out of 10. Hopefully lessons will be learned, and the next effort will kick ass!