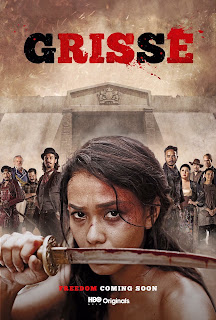 Greetings valued Dan's Movie Report readers. Today is a binge worthy day! Yes, finally the long road from production, to HBO Asia release in November, to March 6th has arrived! At only 8 episodes, Grisse run time felt exactly right, longer than a 4 or 6 episode season, without the padding needed to cover an entire 13 hour story arc. The fictional town of Grisse, is controlled by a tyrant of a Governor. The Dutch controlled town is full of a rag tag band of locals, farmers, many of whom are too poor to know any better. They begin to rise up following a brutal execution of townsfolk. While the plot seems a bit basic the story unfolds colorfully and in detail. This is a western, yes a good old fashion king, rough housing shoot-em-up! The fact that Grisse was shot in Asia, is so cool, because of the merging of East and Western cultures, results in a dramatic flair for action! A big cast, which is a huge change from the old “Spaghetti” westerns made famous in the 1960s where essentially a lone gunman had to fight a band of outlaws. Grisse expands upon this what if the entire town was made up of basically downtrodden outlaws and the leaders were already in place, not a hero, a band of bandits but real life governmental tyranny! 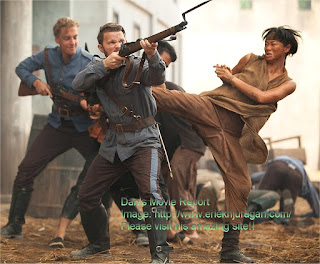 I do not like spoiler reviews and to be quite honest, the show unfolds like a series of movies all tied together, episodes are sometimes over one hour long, and each merges to the next to tell the complete story. I had the wonderful opportunity to do a detailed interview with Tony Tilse, who directed 6 of the episodes and he speaks on location shooting and how he was approached to direct. http://dansmoviereport.blogspot.com/2019/01/director-tony-tilse-interview-grisse.html 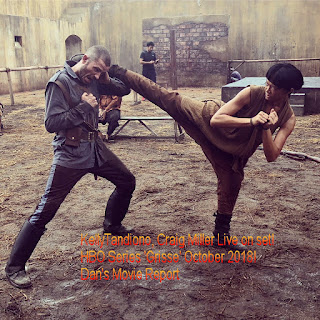 Another ass kicking haha photo! Kelly Tandiono on the set of Grisse!

The cast is just great, no one steals the show, which is a very important aspect of Grisse. The character development is strong, for example an older lady in town, short and what seems to be unassuming at first becomes a central strong character, again no spoilers. Plus the women get in on the action, because they have to to survive, desperate times call for desperate measures! Speaking of bad ass strong Grisse women I had the opportunity to interview the incredibly talented Kelly Tandiono who portrays Hidayat, a strong woman almost an androgynous character, I must say her presence in the production is really refreshing, she is a full sized lady who can kick ass, and show emotion. Check out our detailed interview: http://dansmoviereport.blogspot.com/2018/12/actressmodel-kelly-tandiono-interview.html 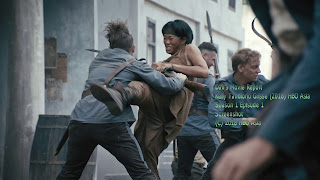 ABOVE: Screenshot from Season 1 Episode 1 Kelly's character Hidayat kicking some fool's ass, as usual. (C) 2018 HBO Asia, promotional use only not monetized.

Overall this is a great product for HBO Asia, and hopefully the series will be allowed to have a second season and more productions in Asia will come to the U.S. In the future. Grisse is a western made in Indonesia which deserves a home in the U.S.A.! The talented cast and crew should be celebrated, Grisse rates a very strong 8.5 out of 10, truly a must own, I do home it comes to home Blu-Ray with special features! Incidentally a very cool behind the scenes video exists which details the characters: https://www.youtube.com/watch?v=Iun1klz6iKI

Also actress Kelly Tandiono has exclusive behind the scenes video of her training and on the set of the show! https://www.youtube.com/watch?v=RF5vew1aUyU&t=10s

Watch for more from the cast and crew of Grisse, coming later in 2019, on Dan's Movie Report, all exclusive all the time, and www.actionflix.com
The top indie action site on the web!

For further information on the show:
http://hboasia.com/HBO/en-sg/shows/grisse/

The US series is available now on all HBO platforms!  https://play.hbogo.com/series/urn:hbo:series:GXGR8ggjVM4GmwwEAAAAC