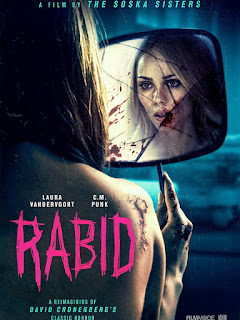 Greetings valued Dan's Movie Report readers. One of the first introductions to horror for me was David Cronenberg's 1977 masterpiece 'Rabid'. More of a thinking man's infection outbreak film. In that film, a sexy Marilyn Chambers undergoes an experimental plastic surgery, and develops a taste for human flesh. Cronenberg's films have violence and blood, but always stray away from the norm. Fast forward to 2019, Jen & Sylvia Soska tackle the difficult remake. The Soska Sisters are co-directing and co-writing the film. The updated film has elements of stem cell research and a very slick fashion designer theme as well.

The Soska's up the blood and gore factor, but it works in the 2019 Rabid. They are masters of the flowing gelatin, yet the biting social commentary makes for a sultry dynamic ride. Horror told from a female prospective allows for a reveal of the initial facial scar, and how much emphasis is placed on looks. Vanity is almost forced on ladies in the film world, and the 2019 Rabid makes sure to up the way the ladies not only look, but comment on how their counterparts appear.

'Immortal skin grafts' are discussed, as Rose gets the treatment. Laura Vandervoort as Rose delivers a sublime, and commanding performance as Rose. She constantly checks her appearance, and gains confidence through the movie. Sometimes she is passive, other times she is feral and aggressive. Vandervoort is a pro, and she pushes her own boundaries in Rabid. Rose has the visions of feral, carnal violence.

The original Rabid is 90 minutes including credits and the Soska version is 107 minutes. The longer version allows for more dialogue and retrospective. In addition a very developed side plot of fashion designer Gunter portrayed by Mackenzie Gray. Gray is a pro and revels in the eccentric character, pushing the envelope of flamboyant behavior to the extreme, yet coming down a bit for the quieter moments. Gunter serves as the pushy boss, in a modern day environment, another social device. Look for an appearance by wrestler CM Punk as well.

Rabid has amazing costuming and scenery, especially in the fashion show. Also a special mention to Hanneke Talbot, who portrays Chelsea. I refuse to spoil what happens, but she is a powerhouse force, and whoa, that escalated quick! She states “I am closing the Motherf@#cking show, I am great!” She is amazing and pushes hard to get into character, ranging emotions rather rapidly.

A few notes, I recommend checking out the original Rabid film prior to watching this. Though it is not a requirement, more intellectual horror, requires thought. Rabid is not a typical 'zombie or slasher' check your brain at the door film. There is inherently more dialogue in Rabid than perhaps 95 percent of the horror film released. If you see negative commentary of this film, consider the source. The original Rabid is more subdued, yet the terror is real when it ramps up. Rabid 2019 is more of a frantic pace, yet has much of the same feel. Comparing the two films is unfair as the pacing is different, yet there is enough of the similar elements for a remake. In 1977 Rabid had a rather specific and limited audience, yet developed a cult following years later. With a splash in major horror film festivals and a release, the 2019 film will repeat that, and hopefully get people viewing the original film as well.

Catty behavior, some biting humor, expertly filmed, the 2019 version of Rabid is ravishingly entertaining. The film expounds and pays homage to the original with updated gore and special effects, which do not detract from the intensity. The Soska's Rabid rates a solid 7 out of 10, Happy Halloween!

Rabid unleashes in the USA around December 13th from Shout! Factory.