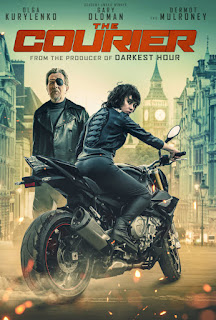 Greetings valued Dan's Movie Report and www.action-flix.com readers. Chatted with my friend Lee Charles recently. He has a part in and was Olga Kurylenko's trainer for the new kick ass film called The Courier. Olga plays the title character (The Courier) and she had to go through a myriad of training for the part. Now the trailer has dropped and the film has a release date November 22nd, 2019.

Synopsis: This intense action-thriller film unfolds in real time as two embattled souls fight for their lives. Academy Award Winner Gary Oldman stars as a vicious crime boss out to kill Nick, the lone witness set to testify against him. He hires a mysterious female motorcycle courier (Olga Kurylenko) to unknowingly deliver a poison-gas bomb to slay Nick. But after she rescues Nick from certain death, the duo must confront an army of ruthless hired killers in order to survive the night.

The Courier is directed by Zackary Adler, who also serves as one of the writers and one of the producers. Lionsgate will distribute the film in the U.S.A. Look for a November 22nd release!!

The Courier looks to be a R rated thrill ride with the amazing Gary Oldman and Dermot Mulroney involved. According to Lee, crafting action took several months, very meticulous, and hard training. Olga Kurylenko brings maximum effort to all the projects she is in, and this looks to be brutal! What is also cool is a balance of not just guys saving the day, the ladies, are involved in the action! Actress Alicia Agneson plays Agent Simmonds, she also will enter the dangerous fray. Incidentally, Lee plays a character named Fripp, and is the assistant fight choreographer, very much looking forward to this action!

The Movie Trailer Channel has an official U.S. Trailer

Connect with the amazingly talented Olga Kurylenko on her official pages: