Synopsis: CLEANING HOUSE is an 80s driven action comedy that revolves around a spirited maid named Sydney (Marissa Labog) and an overzealous secret agent named Dylan (Shahaub Roudbari). As her love for Whitney Houston disrupts his covert op, a frantic battle erupts revealing things are not always as they seem.

Marissa serves as the writer and producer and Shahaub serves as the director for Cleaning House. The film opens with Marissa as a maid with headphones on, seemingly oblivious to the fighting going on around her where various thugs are attempting to take out Shabaub's character. In all actuality, things are not what they seem. Eventually and I mean deliberately, slow, and methodical, Marissa, unscrews a mop handle, very dramatically. In the ensuing seconds she uses her speed, action, and amazing dance moves to punch and kick her way through the thugs. 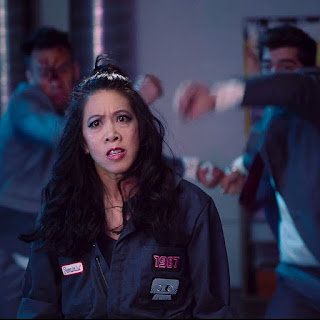 Marissa, always engaging, makes astute social commentary as well, about women in the work place. Though 'Cleaning House' is a far lighter tone than the Earth shattering short 'When Kids Grow Up'. In that film Marissa plays a potential rape victim, with realism and danger. Marissa manages to get a message in, and drive the point home, even though Cleaning House is a comedy. Marissa may be short in stature, as she often demonstrates in her action films by taking on much bigger opponents, yet displays no fear, and always pushes forward. In Cleaning House' the action is clear, pronounced and easy to see and enjoy. Everyone involved should be commended for their efforts

Near the end of 'Cleaning House' the amazing action professional Amy Sturdivant comes out and proves that women not only belong as equals, but are as Marissa puts it are “more than qualified”. The fighting takes place in a pastel lit Miami Vice style room, adding to the 80s vibe. Overall, another great short. 'Cleaning House' rates a strong 8 out of 10, I hope it goes to some action film festivals in the coming months!

Finally, although it was conducted some time ago, please check out my interview with Marissa: http://dansmoviereport.blogspot.com/2013/04/actressstuntwoman-marissa-labog.html