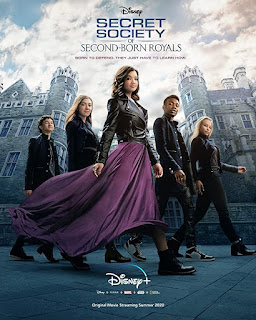 Above Image copyright 2020 Disney+, used for promotional purposes only.


Greetings valued Dan's Movie Report and Action-Flix.com readers. Disney+ has begun to really up their content, there I said it. With all of the Marvel Products and Star Wars stories under their belt, it is nice to see an original movie, not directly related to those properties on the service. Secret Society pf the Second Born Royals creates a new realm, yet burrows from many old themes. Disney probably is aiming this film at more of the 11 to 15 year old market.

For the purposes of the review I will refer to the film as Second Born Royals, in fact at one point in the film a character makes a joke about the name being too long hah. Subtle humor yet dealing with very serious issues as in one character is contemplating suicide.

Essentially what we have here is a coming of age story, with superpowers, think X-Men: First Class, yet the back story is slightly different, they are already outcasts in their families because they caused harm to others with powers they did not know they had. One character caused a fire to kill many people in the mine where he and his father worked. Some others have their powers revealed later in the film.

All of the subjects in the institution go through constant monitoring, and are seemingly tried to be reintegrated into society, yet something sinister is going on in the big picture. Second Born Royals assumes there are 'good mutants' already living in the world and these kids need their skills honed.

Many cultures are explored, which thankfully is the norm in 2020. A particular Native American character has nightmares and psyonic energy and visions of many things from powerful storms to a giant bear, no spoilers it all ties together in the end.

No secret here, the main reason I watched this one was Elodie Yung, she takes on the motherly role of queen, and (Spoiler) the leader of The Secret Society of Second Born Royals! After her brutal take as Elektra, Elodie, who is a new mom herself steps into a leadership and mentor ship role. I enjoyed her character, just wish more screen time was given as a build up to her reveal as the leader, Queen Cathrine. 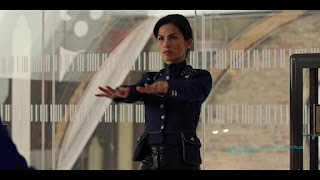 Above: Elodie Yung, gets ready to reveal her power! BACK OFF! Image (C) 2020 Disney+ used for promotional purposes only

I was wondering if Second Born Royals would work better as a 8 episode series, thus allowing more explanation and backstory. Disney movies, by their nature are inherently short for the most part, at 90 minutes Second Born Royals rushes through the characters back story, yes the original X-Men film 21 years ago is short, but we saw a pretty solid back story of Magneto and Rogue, plus being that they are already comics, people that read the comics know the characters. Director Anna Mastro who also serves as one of the Executive Producers discusses the possibility of sequels with Collider @ https://collider.com/secret-society-of-second-born-royals-2-sequels-director-anna-mastro-interview/

On to the action, Second Born Royals has a style melding mental powers and physical fighting, one character has a super-powered arm and wields it not unlike Psylocke of the X-Men. It is PG rated so nothing too crazy, but some pretty cool stunts. Again these are kids just learning their power, yet it does get more aggressive towards the end. The amazing Matt Mullins is one of the stunt coordinators, his work is legendary, having coordinated The Defenders series and season 2 of Luke Cage. The ultra talented Alicia Turner, who has worked on various projects ranging from the new Nancy Drew show, back to Nikita brings a wealth of knowledge to the young stars, building up their confidence in action! Again #StandupforStunts! Kudos and credit to Variety for their article on the stunts! Nice to see stunt professionals having an article in a well read and respected magazine! https://collider.com/secret-society-of-second-born-royals-2-sequels-director-anna-mastro-interview/

The lighting, camera work, sets and CGI are all very good and up to Disney standards. The budget is not 200 mil so expect a slightly lower tier, would have been nice to see this on a theater screen. The music fits the movie, ramping up the tension and anxiety towards the end.

Is the story original, not really which may be a bit off putting, as it burrows several elements from many other films and shows, yet intrinsically the film has a quality that is enjoyable. Now many services are creating their own properties like Amazon's The Boys and Netflix'a Umbrella Academy which are both squarely aimed at adults, Disney at least in the USA seems to adhere to children first policy yet overseas has dipped their hand at releasing or distributing R rated content. That is their niche, the happiest place on Earth, in Second Born Royals, many things are not so happy haha!

Even though I wanted more back story and length, the acting from the young stars is pretty good and kind of hope for a second film. Elodie needs her moment to get into the action, not just look amazing in sexy and regal outfits giving sage advice! Secret Society of Second Born Royals rates a 7 out of 10.

Secret Society of Second Born Royals is now streaming on Disney+ at no additional charge.