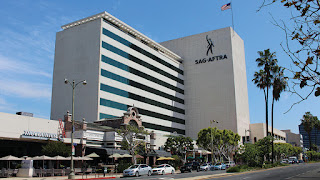 
Greetings valued Dan's Movie Report and Action Flix.com readers. Actress and stunt professional Crystal Santos and I have in the past had discussions about the practice about hiring white stunt professionals for Latino and African-American people, and making them appear racially diverse. Sadly Crystal says still in late 2020 she tells me that this proactive is still going on.

In my opinion, with the wealth of performers available worldwide, there is no shortage of people willing and ready to travel to hone their craft. Yes this is a hard time for performers in all forms of entertainment, yet by not hiring diverse, competent talent in the long run the industry will suffer. Film and TV are global with the power of streaming services, why can't the stunt people and even the crew be as diverse as the global audience that consumes the programming. SAG-AFTRA and Producers all over the world need to come to a working agreement to end this practice.

I have had the opportunity to interview several culturally diverse stunt women in my writing career: Angela Meryl, Ming Qiu, Tamiko Brownlee, Yessenia Cossio, and of course writing about Crystal and her thoughts. Just because a person is of a different race, creed, or background does not mean they wont work just as hard as their white counterparts. All they want is to be given the opportunity to work and or audition for the casting.

Crystal States the following in her lengthy letter:

" It can be stated, that our Union and the Studios and Producers have let us down, they have never truly protected and provided equal opportunity for performers of color. They simply rebranded and relabeled BlackFace, BrownFace, RedFace, YellowFace with the term paintdowns. As long as this word paintdowns remains in our SAG-AFTRA and Entertainement industry language giving the illusion of authorizing the entertainment industry the use of paintdowns, we stunt performers of color will never receive equal opportunity. This problem bleeds into every sector of the union affecting actors, background, stand-ins etc. Paintdowns need to stop if we are really ever going to achieve equality."

The Deadline article has statements about this practice:

Recently SAG-AFTRA has issued a statement on the matter, hopefully this will be the start of more inclusion measures on into 2021 and beyond

There is a petition to sign, but of also importance is to support by paying to watch films and shows that celebrate diversity.

As a final comment, I challenge all my other writers in the action film genre to write and speak about this to people you know in the business, this will also work to change the narrative on this practice.

An online petition has begun for a call to action: https://www.thepetitionsite.com/377/872/772/ending-hollywoods-dirtiest-amp-longest-kept-secret/

I urge all of my readers to sign the petition and share on your own personal pages.

The following SAG-AFTRA members have signed this historical Call to Action for Diversity and Inclusion in Stunts: