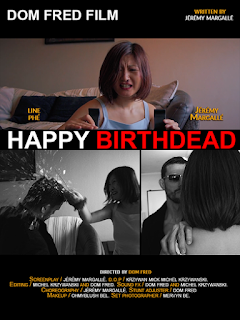 Above Poster for Happy Birthdead A Dom Fred Film (C) 2020

Greetings valued Dan's Movie Report readers. I was asked and was able to remotely judge the IDTV Action Fest for 2020. Due to the pandemic, the films were screened virtually. My favorite short film of the lot was the French entry from the amazing Dom Fred entitled Happy Birthdead. The four minute blast got straight to the point and right into the action. The premise is a man is walking up to what looks like to be a small apartment or hotel, he is ominous and carrying a briefcase. The somber tone pas palpable as he was shot from behind.

Happy Birthdead is a sardonic yet powerful tale of mistaken identity and the dangers of strangers. Once entering the room the man sets the briefcase down and. Let me just say this hell erupts in the form of a very petite very angry lady. Actress https://www.facebook.com/LinePheActriceModele Line Phi' is just damn amazing. The four minute film serves as a demo for her wide range of acting: scared, disappointing, angry, frustrated and finally remorseful. Dom Fred and his incredible team craft a masterpiece with minimal budget yet can serve as reminder to film makers to always create.

Everything about Happy Birthdead is great. The fact the film is not one of those staged fight short films where people kind of wait look menacing then begin. Words are exchanged in French, yep kiddies this is a French film,! OUI! Suddenly, instead of waiting to be attacked Line PHÉ - Actress decides to take matters in her own hands and jump on the back of her attacker, it is a dirty fight, but amazingly Dom Fred has essentially mastered the art of fighting without breaking things, I am sure this is part budgetary part the fact that since this is the home of the young lady she does not want to break the expensive TV or worse disturb the neighbors, hah!!! I am sure if Line wanted to disturb the neighbors she could!

This is an action film infused with raw fighting, the most realistic way of small vs big. As amazing as polished fighting is, beautiful to watch, Dom Fred has a “dirty crisp” close fighting idea and the small yet nimble actress has the acting and flexibility to pull off the moves.

The film is excellent and was my recommendation as well and won best fight sequence at the 2020 IDTV Action Fest Film Fest. The entire film is online on YouTube @ https://www.youtube.com/watch?v=9Yke8Rwx23Q

Overall Happy Birthdead is one of the best short films in 2020 and rates a solid 8.5 out of 10. I sincerely hope that this extremely creative and talented team is given the opportunity by some intrepid and daring producer to produce a feature film with this element, or even choreograph an element of a feature!

For Line PHÉ - Actress here is her latest Demo in French, she does speak English and Chinese as well, and is always looking for quality projects: https://vimeo.com/437277362

For the amazing Actor Jeremy, please check out his Official Website @ http://www.jeremymargalle.com/

Watch for more in 2021 From Dan's Movie Report, I am ready! Including interviews with Line and Dom!