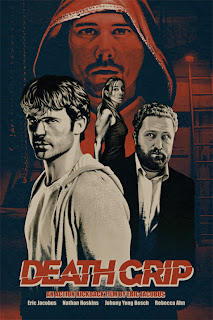 
Leave it to Eric Jacobus and his fantastic Stunt People crew to come up with a highly original film concept, the theft of a magical coin with a biblical connection, and wrap it around the backdrop of some of the finest fight sequences ever recorded.

Eric portrays Kenny, a mysterious guy who is becomes responsible for his brother Mark, who was placed in a mental hospital after their mother died in a fire due to Mark locking her in.

Death Grip focuses on the two leads and takes the time to develop the characters. The action heats up when the two take on a catering job and deliver food to an artifacts showing where a rare coin is displayed. The coin is locked up digitally, but thugs come and and attempt to steal it, but Mark is able to grab the coin first as he is part autistic, but do to his childlike mental  capacity.

For a bit of spice Rebecca Ahn's character Rindy seems to play both sides good and bad, wanting the coin adding a bit of mystery to the proceedings. Rebecca has really intense facial expressions. Actually all of the actors are rather intense and obviously Eric took time with the actors and himself to get the facial and body actions to belay their respective characters' emotions.

The plot is rather complex for a lower budget film, and requires careful attention from the viewer, there are religious and demonic undertones, but by the end of the film things become quite clear. Follow the coin, and see where it goes!

I hate when reviewers spoil the plot of films, and the events occur in Death Grip, should not be revealed, but I will reveal the action. Eric and his crew have made an epic action film, the fights are stunning, well lit and expertly filmed. Everyone gets involved in the action, and every object becomes a weapon, watch for forks, soft slippers, light bulb, fountain pen, and cute Rebecca wielding a chair leg. The crew of Death Grip is inventive as one fight even takes place in pitch black darkness. The fights also vary in styles from multiple attackers to one on one fights. The backgrounds are sparse which is cool, it puts the fights in focus and in the spotlight.

Death Grip has the repeat watch-ability factor and rates an 8 out of 10, a must purchase. (Please note, this rating has been changed up by a point after a second watching of Death Grip.) This is an entirely self financed project, and as an independent writer I am looking forward to more work from Eric and The Stunt People Crew. Buy it directly from them and support indies! Death Grip your browsers to http://deathgripmovie.com/
Posted by Dan's Movie Report-Danny Templegod at 4:00:00 PM