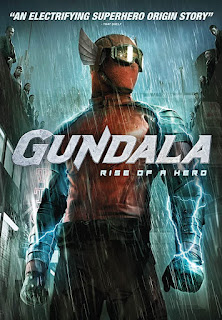 Above: Poster for Gundala taken from IMDB page.

Greetings valued Dan's Movie Report & Action-Flix.com readers, across my desk today comes a radical new flick out of Indonesia called Gundala. Gundala is a superhero type flick, but rooted in strong, stylized Indonesian action. The movie, which has a running time of over two hours looks to set up a multiple film story line about this a superhero, whos name translates to the word thunder. His powers seem to be derived of lighting and he does harness the lightning for power.

Rather than spoiling the film I will point my readers to this link on Wiki https://en.wikipedia.org/wiki/Gundala_(film) this DOES spoil the plot line, so only read after you have watched it, will clear up things about the movie. Essentially, a young boy who is orphaned due to his father being killed and his mother being sick, has to find his calling, Many forces are telling him not to get involved when he sees injustice, but as he gets older he realizes that not only must he fight for good, but he needs to awaken his superpowers to fight.

Usually Asian films do not have the longer run times beyond an hour an forty minutes or so, but this is an origin story and I appreciated the time taken to learn about the character prior to getting his powers. In addition the people in his life including Wulan played by Tara Basro, who plays not only the love interest, but she has to impress upon Gundala how important it is to take up the fight.

The story line is a bit detailed and may be a trifle confusing, thus warranting a second viewing. The action fans here are really in it for the fights, and here is where Gundala shines like a lighting bolt! With a story line behind them, the detailed fights partially coordinated by Cecep from The Raid, are really amazing, and creative. Here we have multiple one vs many fights, in which Gundala has to avoid and react. The fights are longer and often not completely resolved, IE people come back to fight after being seemingly down for the count. In a superhero type film though this is not an issue as it happens.

There is a gang style fight on various levels of railings and stairs at an industrial factory that is a bit interested as some of the thugs are deposited down what appears to be a deep opening, only to re-appear later in the fight. Suspend belief, as this is downright comical level violence, with a middling level of blood, it is not deadpool, but not Avengers. The subject matter though is mostly for adults and people over 15 or so. I discuss this, as although the film is no where near as violent as the raid it is close and has some very somber tones.

Though I enjoyed most of the cinematography most of the film is shot in a bland sepia tone, that said it looked dark and dreary outside for much of the movie anyway. The nighttime scenes were not as well lit as they should be, but actually in this case it gives the movie more of a mysterious feel, and you still could see what was going on.

Director and writer Joko Anwar handles the adaptation well and keeps the story flowing, never getting bogged down in unecessary filler. Dialogue is important in superhero origin stories to learn about the character and their flaws and strengths. Gundala is a slow build, and his original suit is made up of common household items including a woman's handbag! A man of the people and Anwar makes sure we see this, there is no fortress of solitude here, Gundala is a humble often reluctant warrior. Once though he realizes his power, there is no stopping him and even a powerful villain like Kelly Tandiono's character of Mutiara is ultimately no match for his strength and harnessing of lightning!

Above Kelly high kicks Gundala in one of the near ending fight scenes, (Note to self Kelly is sweet, she kicks high and is somewhat dangerous ha!) Image (C) 2020 Well Go USA

Speaking about Kelly, Thanks to her for telling me about this movie last year, or else I may never have heard about it, even though it will be out in the US on Well Go USA on July 28th. Kelly plays a very bad girl in the film and is hot and hell bent on killing Gundala, and she shows off some cool moves, I like her lines and style in action, and hope she gets in on some US film asap as we here need less tiny fragile girls in action and more taller rougher ones!

Look for a new interview with Kelly, in the meantime check out our 2018 interview where she talks about working on the project:  http://dansmoviereport.blogspot.com/2018/12/actressmodel-kelly-tandiono-interview.html

Overall, I really enjoyed Gundala, and am of course looking forward to either a sequel or even better perhaps would be an 8 or 10 episode Netflix or HBO series, with the characters even more fleshed out so to speak. I rate Gundala a buy and 7 out of 10!