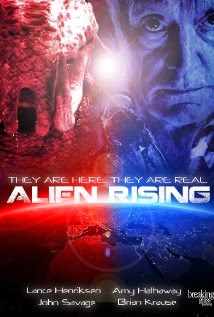 Originally titled 'Gemini Rising' this independent film will be released by Breaking Glass Pictures on January 20th 2015. Keeping this film review short, Alien Rising is a story of an ex-homeland security agent Lisa Morgan (Amy Hathaway). After watching her partner die on a mission, she wants to put distance between herself and her past life. Turns out Lisa is a twin and she is needed for some sort of top secret experiment on an alien and it's doppelganger.

Sadly the film unfolds at a pace that is about as urgent as a snail riding a turtle's back. Lisa is kidnapped against her will and she is forced to fight much larger agents to prove herself. While the fighting itself is not bad, the action feels like padding that serves as a distraction to the main story.

Lance Henrikson and the rest of the cast plod through what perhaps could have been a decent film, but the twin connection is never fully explained, and by the time the action gets going, the interest in the characters wane.' Alien Rising' has some rather questionable CGI but not bad for an indie film.

On the positive side, the film has some thought provoking concepts, with regards to the treatment of the aliens. The fact that it explores treatment of another species can of course correlate to the way the U.S. treats immigrants. Amy's acting is pretty good, given the tepid source material. Overall, I give 'Alien Rising' a rent only rating, 5 out of 10. The film is available on Amazon, follow the link below.