One In the Gun- Movie Review 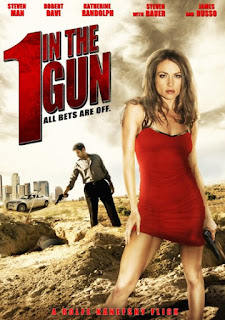 One In The gun promises double and triple crosses, and a sexy noir thriller. The plot gets in the way of what could be a surprisingly good story. The movie revolves around Katrina Webb, played by Kathrine Randolf and her desire to get out of her marriage with her rich husband Arthur portrayed by Steven Bauer. A chance meeting or is it with Mickey Lewis (Steven Man) helps to facilitate the blackmail.

The set up is solid, however there are so many interludes of filler and the film is dragged down by confusion on what is reality and what is inside Mickey's head. There is a plot to steal one of Arthur's paintings and sell it on the black market for five million dollars. Things get weird when the audience is lead to believe one aspect of the story then all of the sudden is whisked away to a totally different scenario, more often than not making any sense. If just one storyline was adhered to the movie would have been more cohesive.

I wanted to like the film, the lead actress Kathrine does a decent job of being sexy, but not cold enough to be believable as a conniving wife. She has several nude scenes and her body is nice to look at but after awhile even a cute girl with her clothes in the off position can get monotonous. Even though the movie was 80 minutes, One In The Gun was padded with unnecessary filler material to extend the time.

With a muddled plot, and rather bad acting I cannot recommend One In The Gun, I rate this movie a 3 out of 10.

Zara Phythian has been one busy lady working on the UK Cavegirl TV show and now a shoot for Sony. Below is a new promo pic of the sexy and dangerous Zara from the Cavegirl TV show: 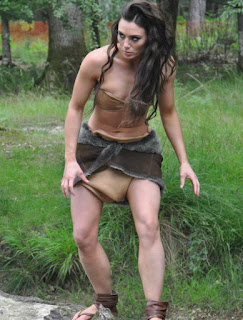 In addition to those projects she is also in the process of preparing for a new movie called Knockout in 2012. For more info go to the official Facebook page @ https://www.facebook.com/pages/Knockout-Movie/120920154656750

Zara's horror film The Hike will be released in the UK on October 24th. 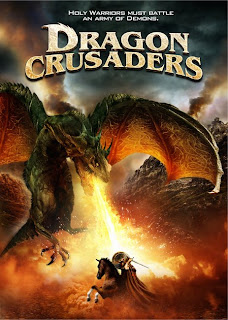 Dragon Crusaders represents a major leap forward for home video company The Asylum. Although the film was shot on a low budget, with only a two week shoot, the result was a highly watchable and entertaining romp through a Wales forest complete with dragons, pirates, and gargoyles.

The film opens with pirates raiding a small peaceful village. Dragon Crusaders is a bit bloody, but in the fantasy violence way. Our small band of holy warriors are on a hill overlooking the small village and decide to help. Each of the men have a certain fighting skill, including an archer.

When they reach the village the dispatch the pirates with the help of Aerona portrayed with captivating ferocity by Cecily Fay. Although Fay is rather short, she wields her sword with precision and purpose. The director Mark Atkins mentioned that he put her in the film because he wanted people who already do the action, rather than hiring a series of stunt people. In addition to her sword prowess, and acting ability, Cecily is also a singer and sings some of the tunes used on the movie. 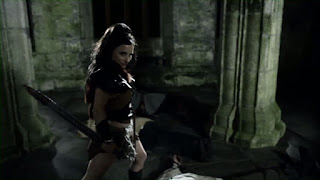 (Above Pic: Cecily Fay as the warrior Aerona, proving that danger comes in small and cute packages!)

After they dispatch the pirates, the holy warriors sail in a small boat to the pirates' ship and board it. Below deck is a woman named Neem, she has put a curse on all who enter the boat, by turning them into gargoyles. Neem's character is played with wistful passion by Shinead Byrne. Shinead really fits the part of damsel in distress and she has a likable innocence to her. The meat of the plot begins with the quest on how to remove the curse. 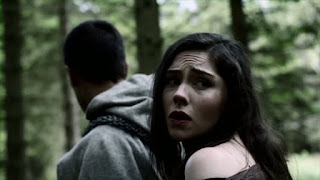 (Above pic is Neem, portrayed by Shinead Byrne)

The movie was shout mainly outside in Wales, on two Canon 5D still cams outfitted with special lenses. Mark Atkins said the cameras allow for extreme portability, much more so than a tradition digital video camera. In addition to the outside forest shots a real 13th century castle was used, for some interior and exterior shots.

As the movie progresses we see that the wizard that the group seeks to remove the curse has powerful dragons protecting him, along with a stoic warrior Calvain played deftly by Christian Howard. Another interesting aspect of the film is that Aerona seems to constantly be protecting the men with her voracious fighting skills. This was clever, and obvious that all of the actors fighting Cecily in the film were well choreographed. Cecily did the choreographing for her fight sequences, and her fight scenes are top notch, although some of the edits were rather quick.

This is a very good low budget film. All of the acting and action is entertaining to watch and there are no dull moments in Dragon Crusaders. Although there is copious amounts of fighting, the dialogue is pertinent and never drags down the film. The actors all show good emotion, have clear speaking voices, and the character development, although basic, helps the flow of the Dragon Crusaders.

The film has a fun repeat watch-ability quality to it that most low budget movies do not have. I rate Dragon Crusaders a 7.5 out of 10 a definite purchase. In addition to the main film there is a 9 minute behind the scenes, short gag reel, and trailers to half a dozen other Asylum releases.