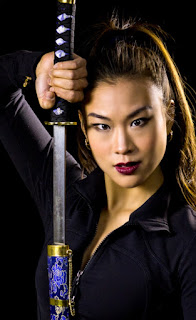 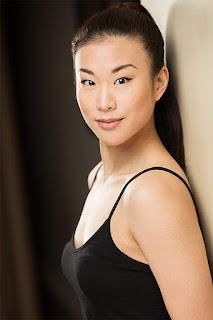 Above: Megan Hui headshot from IMDB and sword photo from her official site.

Greetings valued Dan's Movie Report readers. I was cruising YouTube and was looking at some Staff demo videos and came across Megan Hui. I decided on doing this particular post to drive traffic to her Official sites, YouTube Portal and IMDB page.Perhaps some of the stunt coordinators and directors who read my site can enjoy her work as well!

Megan has been in several projects for acting and stunts. With her gymnastic background, these three action videos below are so fluid I had to take notice.

Megan is based in Vancouver, however, I am sure she is up for some action wherever the production is. Hope to see more of her in the very near future!

Posted by Dan's Movie Report-Danny Templegod at 2:15:00 AM No comments:

Above: Link to the FINGERPAINT on YouTube, with all the credits!

Greetings valued Dan's Movie Report readers, today the amazing Bryan Sloyer dropped a short film masterpiece on YouTube. With the myriad of short fight vignettes on YouTube Bryan and his team have created a short that should play at film festivals due to the plot and imagery.

Introducing Claire, who is the innocent child, yet the foreshadowing in the mind all leads to a fight in the literally the middle of nowhere with a fridge being the tie to the reality.

The film has just the right artistry and action mix. When the fighting is on it is amazing, tight moves, crispy strikes from performers Bryan Sloyer and Joseph V. Oreste. Yet the striking visuals coupled with poignant music makes this a huge leap forward in fight concept films and can easily be seen as a full feature if they want to expand.

Camera work from Bryan and Kyle Potter is top notch. The audience is literally floating around the actors, giving a tone of being in the action yet not to close to be able to see the scope. It is tricky to film fights, Bryan and Kyle have the eye. Gravity & Momentum do the blood FX, which look pretty cool almost like a mix of smeared paint and blood! Claire is adorable and this is kind of like the film starring Amy Johntson The Gate as we see an innocent child be the backdrop to the action. Clever yet not obtrusive!

Bryan proves the importance of practicing your trade all the time, being creative, yet being collaborative. Fingerpaint rates a very strong 8 out of 10!

Action Film Reborn to have it's U.S. Premiere at IDTV Action Fest! 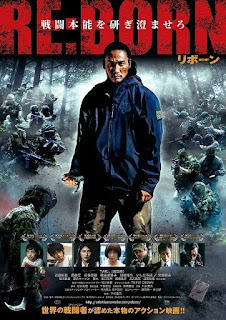 Above: Poster for Reborn!!

Posted by Dan's Movie Report-Danny Templegod at 12:29:00 AM No comments: