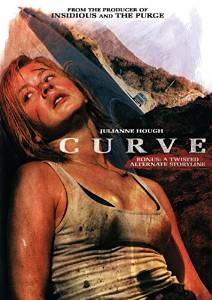 Posted by Dan's Movie Report-Danny Templegod at 1:13:00 PM No comments: 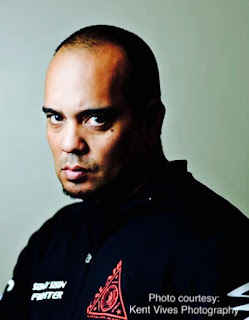 
Sonny Sison has enjoyed a two decade career in action on both sides of the Pacific Ocean. From working with Shannon Lee way back in 1997  film 'High Voltage' to his current project 'Showdown in Manilla' Sonny has worked on a huge variety of projects with a diverse budget range. Sonny takes time out of his busy schedule to conduct this thought provoking interview on your home for exclusives, Dan's Movie Report.


With a nearly 20 yr career in action and stunts, How has the stunt work changed from your observations?


I'd say with the coming about of "The Matrix" and regarding fights, a lot more wirework has been used from then to present.  While there was a select few who were using it prior, it wasn't heavily applied in Hollywood productions.  Since then, it has become the norm for the professional stuntman to have some basic knowledge about it, whether it be as a person having to ride the wire or riggers who put the stuntmen in them.  You'd be hard fetched to find a highfall over 60+ ft that doesn't use a descender assist these days.  In other countries where the technology is too expensive for their budgets, they still do practical stunts.

Regarding fight choreography itself, there has been a lot more exposure to other cultural martial arts outside of Kung Fu and Karate that were given exposure like Aikido, Kenpo, etc.  FMA (Filipino Martial Arts-Arnis, Escrima, Kali) has gotten very popular due to the likes of choreographers Jeff Imada and Jon Eusabio, who have been in charge of the fights from the Bourne movies to Book Of Eli and others.  And of course w/ the popularity of MMA, Jiujitsu and other grappling arts are being used in fight choreography as well. 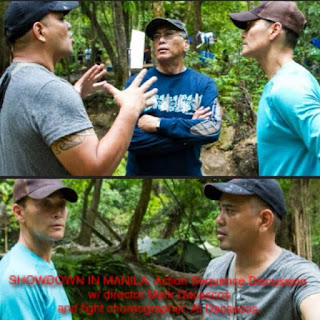 I also agree the CGI alone has changed the way action is filmed. Chat about your work on Showdown in Manilla. Any crazy set stories?What is different about filming in the Philippines than the US?

SIM was a very challenging film.  Given the shooting schedule, which was roughly 3-4 weeks, I was amazed we were able to get the action/fight shots needed.  I give a lot of respect to director Mark Dacascos for holding it all together.  Our ongoing mantra was "Grace Under Fire".  Logistics can be a problem here if everything isn't in place.  That falls into the difference of filming in the Philippines from the US.  Pre-production and principal shooting is a lot tighter, again a budget constraint, which we don't have the luxury of in comparison to mainstream US/Studio-produced films.  But there are some game changers here who understand that when they hire me, I have requirements that I need to do to make their films better for looks and saving time and money, namely previsualization (previz) and rehearsals.  It's quite common here to make up the action/fights on the spot then shoot, which eats into the shooting time for the scene rather than knowing what camera angles/movements and choreography/action to do.  That, to me, makes a huge difference!
Regarding the action genre in the Philippines, unless it's an international co-production, not many action films are shot here.  It fizzled out some time in the late '90s when the major networks figured it was a lot easier and more profitable to make inexpensive comedies and dramas, then rehash them in later films and tv series w/ the same storylines but different titles and actors.  Because of that, in my experience w/ a lot of stunt people here, they're stuck in a time warp of what stunts and fights were like in the '80s and '90s.  That's not through any fault of their own but some are hard pressed to catch up with the quality and methods of performing stunts/fights with the rest of the international action film world.  At the same time, there are those who share my vision in bringing the action genre back.  They just don't know how and that's where my experience of working in Hollywood and with very good fight choreographers and DP's comes in.  In my opinion, there is absolutely no reason why Thailand and Indonesia should be ahead of the Philippines in the action genre when there are actors, stunt people, and local stories that are just as entertaining and talented.  There's the argument that action is expensive to do and no one wants to see them.  For the first reason, there is truth to it.  Action does cost but if well-made makes its money back and profits.  The second is not a valid reason.  Hollywood action movies do very well here as I've witnessed lines around the malls waiting to see them.

When is the release if you know of Showdown In Manilla ?

That I do not know aside from the trailer mentioning 2016.   Mark (Dacascos) has messaged me saying that things are looking great as they put the finishing touches on ADR, Coloring, Sound FX, Score, etc in post edit. 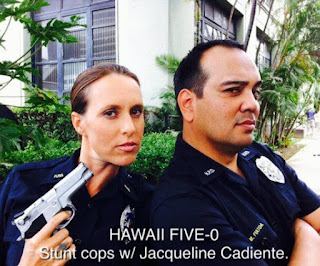 We can chat more on that film after the trailer comes out, shifting gears,  I noticed you worked on Hawaii 5-0 Share some set stories from that show.

Can't say enough how much I love working on Five-0!  I grew up in Hawaii doing my elementary school years and to be back there working on an iconic tv series is heaven!  From the cast, to crew, to production staff...everything and everyone is top notch.  And with Jeff Cadiente stunt coordinating (and occasionally directing episodes), he makes it even more a pleasure to work on the show.  Jeff is a fantastic person to work with, not just for his experience and expertise as a coordinator, but because he really embraces the Aloha Spirit.  And of course there's all the local brothers and sisters I get to work with.  We're all friends and hang out w/ each other when not on set. Even when a mainlander comes onto set, whether they're actors or stunts, they are immediately embraced and taken in.  That is Ohana... Family, and a very important aspect of why I love working on Five-0.  I'll share one funny experience.  During a running chase scene in one episode, crash mats were laid down for a stunt double to take a clothesline reaction to the ground.  That action was taken from two angles.  When the episode aired, the angle used showed the mats on the ground for a few seconds!  But unless someone is experienced in what to look for, you wouldn't know what it was.

Do you like to work on series or films more, do you have a preference or is it a case by case basis.

I just love to work!  Or is that play? lol  It's a dream career!  Perhaps I might lean toward film more because there's more travel involved.  And I absolutely dig going to other countries and experiencing the local culture.

Cannot deny that the more experiences on film the better! Chat about filming short fight scenes, like Assassin Interrogation, with Andrea, how do you approach fighting and action with a martial artist who has not done film fighting before?

I try to work w/ the actor's abilities.  Andrea has a tae-kwon-do background and has been training w/ a local stunt group.  She had yet to experience how it was to work w/ me up to filming "Assassin Interrogation" so the necessary skill needed to bring the best out in her was to give her the proper direction.  Not just in what the moves were, but also the reasons for the transitions and filling each moment w/ emotional content. 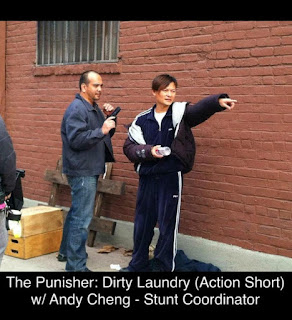 What is some advice for up and coming fighters? Transitioning from actual Martial Arts to film fighting?

Take acting classes.  Take up other arts outside of what you know.  Learn the art of filmmaking.  Read, read, read...any piece of material or book about the industry.  Hang out with filmmakers...directors, DP's, etc.  Ask them questions!  Be open-minded and stay humble!!!

The last sentence is the most important in my book! What is next for Sonny, new projects etc?

Several films are slated for 2016 in which I will coordinate/choreograph.  But more importantly for me, I will produce and/or direct.  It will give me more say in who I can bring on.  There's so many talented actors and choreographers who just don't get the exposure and break to showcase their stuff.  I'd like to help them do that.  A US co-production for a tv series is also in the works so I'm very excited for that.

Looking forward to chatting in 2016 about your latest projects, thanks for the interview!
For more info on Sonny hit is IMDB page @ http://www.imdb.com/name/nm0803059/
Check out his action reel @ https://www.youtube.com/watch?v=Se9PFJD4oIY